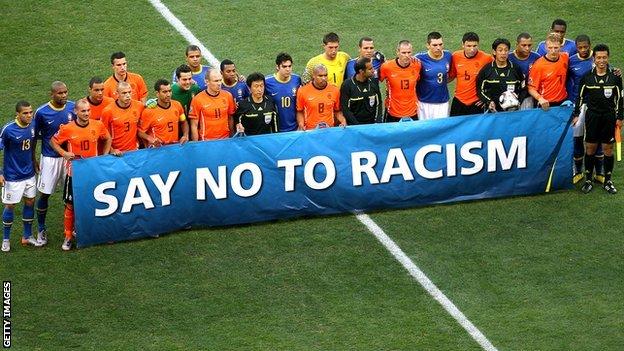 Fifa will reveal further details on Thursday of the role and membership of its anti-racism taskforce.

The taskforce, announced last month, is expected to unveil a new sanctions regime and education programme in time for Fifa's annual congress in May.

Potential members include experts on far-right groups in eastern Europe.

The move is part of a drive by football's governing body to demonstrate it is taking discrimination in the game seriously.

Experts on ethnic minority under-representation and homophobia in the game are also likely to be recruited to the taskforce, led by Jeffrey Webb, a Fifa vice-president from the Cayman Islands.

AC Milan midfielder Kevin-Prince Boateng, who led his team from the field in protest at racism from supporters at a friendly game this year, is under consideration as a potential taskforce member.

Kick It Out chairman Lord Ouseley and AC Milan midfielder Kevin-Prince Boateng are others understood to be under consideration.

A "three strikes" rule for offenders has been mooted, which would see harsher penalties - including exclusion from competitions, points deductions and relegation - replacing financial sanctions, which many within the game believe have failed.

BBC Sport has also learned that a planned April visit to London by Webb - to meet the Football Association and leading players - is now being scheduled for later in the year.

Webb is seeking to learn from the English game's experience of dealing with discrimination and is expected to seek a meeting with FA chairman David Bernstein, given his role in guiding the association through two high-profile and damaging racial abuse cases involving Liverpool's Luis Suarez and Chelsea's John Terry.

Earlier this month, Webb said he wanted to meet victims of racism as well as the perpetrators.

"We'll sit down and have a round-table discussion with the players - some who have faced this and some who have been on the other side as well," he said.

"It's really to engage them and to hear from both sides as to what transpires and to some of the things they've experienced."

Sources close to Lord Ouseley say he is keen to play a leading role in efforts to reform football's response to discrimination but wants to know more about the intent and direction of the group before committing.

The chairman of anti-racism campaign group Kick It Out since 1993, Ouseley stood down last December from all of his positions within the FA in protest at what he saw as a lack of leadership by the organisation, the Premier League, Liverpool FC and Chelsea FC over the handling of the Suarez and Terry cases.

Boateng is also thought to be under consideration as a potential taskforce member but his playing commitments may see the former Portsmouth and Tottenham player's involvement reduced to a consultant role.

The AC Milan player made global headlines this year by walking off the pitch during a friendly match against Italian side Pro Patria after being subjected to racial taunts and monkey chants from fans.

Boateng is due to speak about his experience on Thursday - which he has compared to being "treated like an animal" - as part of a United Nations panel discussion in Geneva on racism in sport.

The event, hosted by the UN High Commissioner for Human Rights, will also hear from the former Arsenal and Manchester City midfielder Patrick Vieira.