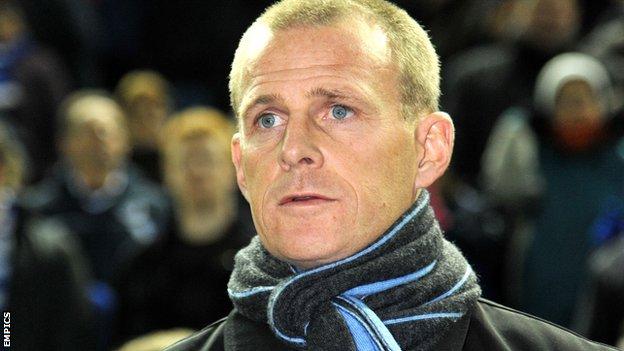 on Wednesday following a run of 14 defeats in 18 League One games.

"It's an absolute shambles," Robinson, whose side are 12th, three places above Boro, told BBC Three Counties Radio.

"He's a good guy and a good manager. The budget matches where they are, maybe even lower. For me it's not right, it can't be right."

Stevenage, whose average attendance of 3,134 this term is second-lowest only to Bury's in the division, were a non-league side three years ago and find themselves in League One after Graham Westley guided them to back-to-back promotions in 2010 and 2011.

Smith took over when Westley left to join Preston in January 2012 and led the Hertfordshire side to a play-off semi-final, falling short of a third successive promotion.

The current campaign started impressively, with Boro among the top six as recently as December.

But a dismal run of results, in which Stevenage took 17 points from 69 available, saw them tumble spectacularly down the table and closer to the relegation zone than the play-off places.

"Gary Smith's gone in there, kept them doing what they did last year and this year it petered out. I just think it's embarrassing," added Robinson.

"Gary's abilities kept him in a job against big, big teams with a lot more money than him.

"You'd expect there to be a bit more quality. I'd be embarrassed going in there off the back of it - but maybe whoever's going in doesn't care about that.

"The relationship with my chairman is so strong. When he gets phone calls from other chairmen, he knows what my answer is going to be.

"And when we don't win many games I know where he stands on it."

Westley, who himself has been placed as the firm favourite to replace Smith and return to the club at which he experienced unrivalled success.

"Stevenage fans are good people," said Robinson. "I like the Stevenage fans. Whenever I go there they are very respectful people.

"I've got tremendous respect for that football club. Because to come from where they've come from, they've built their standards on morals and a commitment to each other and there's almost a sour taste for me."