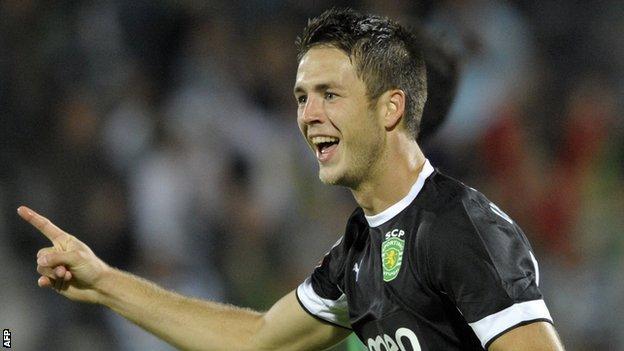 Norwich City have agreed to sign striker Ricky van Wolfswinkel from Sporting Lisbon in the summer for an undisclosed fee, thought to be £8.5m.

The Netherlands international, 24, will sign a four-year deal on 1 July, subject to paperwork being completed.

"He's been very good over the last couple of years. Sporting have hit hard times and have to sell him. He's really built up the physical side of his game and is a very good finisher.

"Sporting only own 35% of him. The Portuguese media say the deal was done on Wednesday for 10m euros (£8.5m). The club need the money to pay the wages. The idea is Norwich pay now and get a bit of a bargain, because his buy-out clause is about 22m euros (£18.7m)."

Van Wolfswinkel has scored 13 goals for Sporting Lisbon this season.

"Ricky's profile is a perfect fit for us - he's young, ambitious and a proven goalscorer," said Norwich boss Chris Hughton.

"He has an excellent goalscoring pedigree and he's a young man very keen to continue his personal progression and to play in England.

"He's already an exciting talent but he still has more development as a player ahead of him.

He went on to score 23 goals in 39 games in his debut season for the Portuguese club.