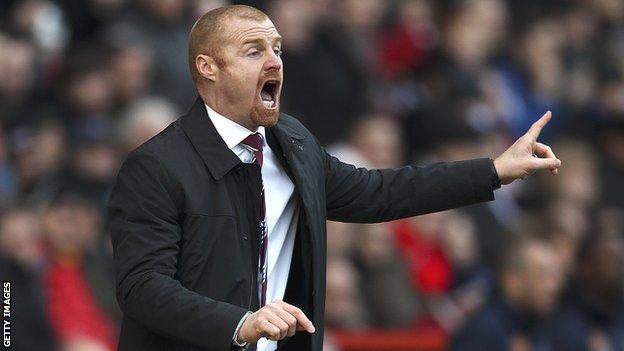 Manager Sean Dyche has warned Burnley's out-of-contract players that they may have to accept a drop in wages if they want to remain at Turf Moor.

Six other established first-team players are approaching the end of their deals with the Championship club.

"We're not market leaders financially currently, so we can't just give them what they want and they just re-sign," Dyche told BBC Radio Lancashire.

Lee Grant, Brian Jensen, Michael Duff, Dean Marney, Chris McCann and Martin Paterson are the six players whose current contracts will expire at the end of the 2012-13 campaign.

Dyche continued: "With the club transitioning out of the Premier League financially, there are players here who we deem good players and they're on contracts that were signed amongst those years of trying to immediately get back into the Premier League.

"It doesn't mean that we're not trying to do that, but those contracts are going to have to come down because the cost base has to come down. The negotiation process obviously becomes more difficult.

"It's like anything in life. If you're a plumber with a job for £1,000 and your neighbour offers you £2,000, it [the deal] gets done pretty quick. If it becomes a bartering situation, they have to weigh up whether to take that job or if there's one down the road. It's not perfect but it is what it is."

Sean Dyche was the special guest at BBC Radio Lancashire's Burnley special - you can listen to the programme again on the BBC iPlayer until Wednesday, 27 March.