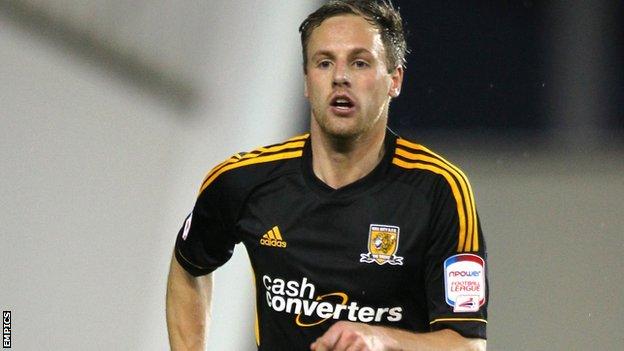 Hull City midfielder David Meyler has urged the team to put a winning run together to end the season by securing automatic promotion.

He told BBC Radio Humberside: "I want to win the next eight games. I'm looking at picking up 24 more points and I'm not looking at anything else.

"With the side and the manager we have we know we are capable of doing it. That is the target."

Steve Bruce's side fell to their fifth home defeat of the season last Saturday, suffering a 2-1 reverse to in-form Nottingham Forest.

The Republic of Ireland international believes the side will need to be more clinical in the run-in to secure a return to the Premier League for the first time since 2010.

"Saturday was a game where we didn't take our chances. We created numerous chances and on another day they would have gone in," he added.

"We've got to start taking those kind of opportunities if we're going to keep winning games.

"In the last few weeks we've been quite inconsistent and that isn't like us in the time I've been here."

Hull face a trip to Huddersfield on 30 March before hosting the Hornets on Tuesday, 2 April.