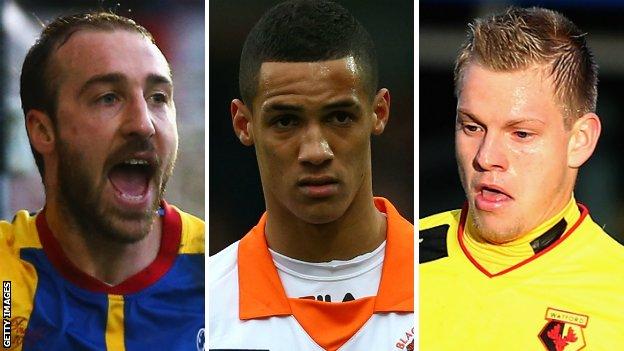 Crystal Palace striker Glenn Murray, Blackpool winger Thomas Ince and Watford striker Matej Vydra have been shortlisted for the Championship's Player of the Year at the Football League Awards.

The awards are to be held this Sunday.

Palace's Manchester United-bound winger Wilfried Zaha is nominated for the Young Player of the Year prize, alongside Ince and Vydra.

Lambert scored 31 goals for the Saints last season [27 in the league] to take the Championship's Golden Boot.

This season's award is set to be won by Eagles frontman Murray, 29, who has 29 goals in the league so far, six ahead of Burnley's Charlie Austin.

Tangerines forward Ince, 21, has 18 goals in the league and has been linked with a return to former club Liverpool, while Czech Republic international Vydra, 20, who is on loan at Watford from Udinese, has hit the back of the net 20 times so far for the promotion-chasing Hornets.

Other awards up for grabs include Fan of the Year, Goal of the Year, Outstanding Managerial Achievement and Player in the Community.