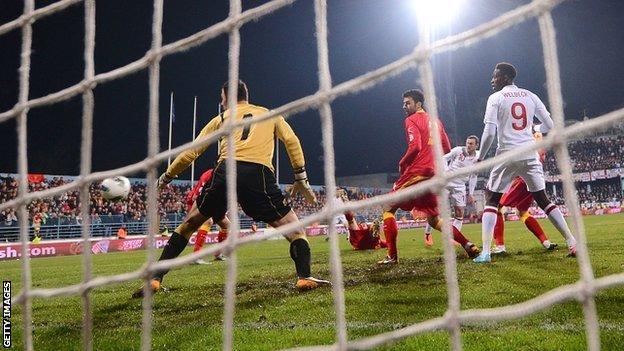 England's path to World Cup qualification remains far from guaranteed as Montenegro battled back to earn a deserved draw in Podgorica.

Wayne Rooney's early header - his fifth in six games he has played for England since Euro 2012 - was reward for an enterprising and positive opening half.

England, however, paid a heavy price for failing to capitalise fully on that superiority and for a dreadful second half display lacking any semblance of composure or cohesion.

Montenegro's confidence and pressure increased as a disjointed England survived a series of narrow escapes before substitute Dejan Damjanovic scrambled home the equaliser with 13 minutes to go and give them the draw that keeps them two points clear of England at the top of Group H.

It was a result and performance that sums up England's performances in the qualifiers as they bid to reach Brazil next summer and will be of concern to manager Roy Hodgson.

England have had no trouble disposing of the minnows San Marino and Moldova but meetings with Ukraine, Poland and Montenegro have not yielded a victory and the manner in which they lost their way after the interval will have worried Hodgson and his backroom team.

Hodgson made six changes to the team that won so comfortably in San Marino, with Steven Gerrard and Ashley Cole among those returning to lend their experience in this difficult environment.

There were ugly scenes before kick-off when fighting broke out in the top tier of a stand behind the goal, with Montenegro fans appearing to battle among themselves. England's supporters were stationed at the other end watching from a distance as a heavy presence of riot police moved in to restore order.

Rooney was sent off last time England faced Montenegro in Podgorica as the hosts came back from 2-0 down to secure a draw in their Euro 2012 qualifier.

But he is becoming something of a lucky charm for Hodgson and controlled all the early events as a fast England start was rewarded with an early lead.

The Manchester United striker's delicate chip beat Montenegro keeper Mladen Bozovic and rebounded off the post and the keeper was in action again to touch Glen Johnson's rising long-range shot over the top as England continued to press.

There was no escape for Montenegro from Gerrard's resulting corner as Rooney found time and space to direct his header away from Bozovic.

Montenegro's early frustrations were illustrated by coach Branko Brnovic, whose attack on England had done much to shape the pre-match agenda. He reacted in fury when Swedish referee Jonas Eriksson failed to award a foul, hurling a plastic bottle to the floor with such force that it ended up on the pitch and earned him a lengthy rebuke from the fourth official.

England were creating all the attacking opportunities, with James Milner firing across the face of goal and Rooney just failing to pick out Danny Welbeck with a teasing cross.

As England pushed for the second goal, Rooney was just unable to turn in Milner's cross at the far post and Welbeck was angry when he was booked for diving after falling under a challenge from Stefan Savic in the area.

No doubt stirred by the words of their outspoken coach, Montenegro emerged with renewed vigour and threatened to take toll of a slipshod spell by England after the restart.

Rooney back on song for England

Stevan Jovetic's header into the side netting had many in the crowd believing Montenegro had equalised while Mirko Vucinic could not find the target when picked up Joleon Lescott's weak clearance.

And Joe Hart will have had manager Hodgson's heart in his mouth when he fumbled Vucinic's routine shot between his legs but was able to recover.

Hart did better to save from Jovetic but Montenegro's equaliser had been coming and it duly arrived after 77 minutes. Damjanovic had a series of attempts at forcing the ball in before finally beating England's keeper.

This atmospheric little stadium was a cauldron of noise and smoke swirled around as Montenegro's elated supporters set up flares in celebration.

Gerrard almost rescued England with an injury-time free-kick that Bozovic dealt with in hugely unconvincing fashion but the final whistle brought huge celebrations as Montenegro's players and fans showed their delight at securing this important point.