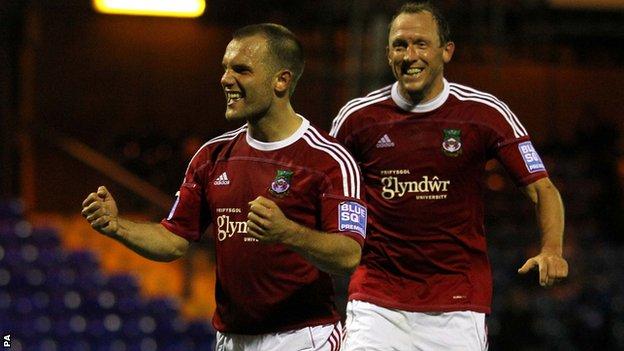 Wrexham boss Andy Morrell has admitted he has had sleepless nights over selection ahead of Sunday's FA Trophy final against Grimsby.

The Dragons will make history when they play at the home of English football for the first time.

But Morrell admits picking his team for the Wembley showpiece will be an unpleasant job.

"It's going to be horrendous - it's not a job I particularly like doing," said Morrell.

"Already [I've had] a couple of sleepless nights over making the decisions. But that's football."

Left-back Neil Ashton, who is struggling to be fit for Sunday with an ankle injury, is Morrell's only fitness concern.

The rest of the squad are rested after Tuesday's scheduled Blue Square Bet Premier match against Mansfield was postponed.

But despite his selection dilemmas for the final, Morrell insists winning promotion back into the Football League at the end of this season remains Wrexham's priority.

"Really in the grand scheme of things the bigger picture is that it [the Wembley final] is just another game for us," he said.

"And we have got eight more cup finals coming up after it which are probably more important that the one at Wembley."

The Welsh side are third in the Blue Square Bet Premier currently two points behind leaders Kidderminster but with a game in hand.

Wrexham beat Gainsborough 4-3 over a two-legged semi-final to reach Wembley.

Grimsby lie fourth in the Conference and are also focused on promotion,