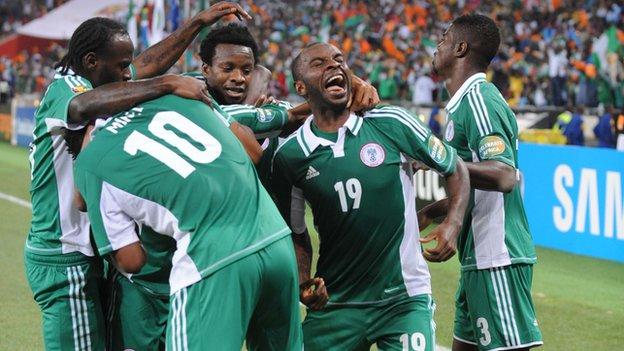 African champions Nigeria can take complete command of Group F with a win at home to Kenya on Saturday in the latest round of qualifiers for the 2014 World Cup.

The Super Eagles lead the way in their group on four points from two games and are 33 places higher than Kenya in the Confederation of African Football rankings.

Nigeria also have home advantage and there is a three-point gap between the teams.

The Super Eagles beat Namibia at home and held Malawi away last June, while the Harambee Stars secured only one point after a home draw against Malawi and a loss in Namibia.

However, Kenya and Celtic midfielder Victor Wanyama believes his country can spring a surprise.

"The players are ready, there is a lot of mental strength among them and we are hopeful of a favourable result against Nigeria," said the 21-year-old Kenya captain.

"Everything is possible in football and Kenya can win in Nigeria - it is time the Harambee Stars moved forward in international football."

Nigeria ended a 19-year trophy drought when they won the Nations Cup in South Africa in February, beating Burkina Faso in the final.

But coach Stephen Keshi has urged his players to forget that success and concentrate on a new target.

"South Africa is history now and Nigeria must qualify for Brazil next year. We need the support of everyone to ensure that happens and I know my boys will not let the nation down," he said.

Keshi has called up two midfielders - Ukraine-based Michael Babatunde and John Ogu of Portuguese club Academica Coimbra - who did not make the 23-man Nations Cup-winning squad.

Burkina Faso are in trouble having taken only one point from two Group E games, and that was later forfeited because they fielded ineligible defender Herve Zengue in a 0-0 home draw with Congo Brazzaville.

Belgian coach Paul Put's side created one of the biggest upsets in Nations Cup history by reaching the final, and player-of-the-tournament Jonathan Pitroipa says they must carry on where they left off in South Africa.

"We must build on the Nations Cup results and prove that our results were not a flash in the pan," said the midfielder.

The Stallions host Niger in Ouagadougou while leaders Congo are at home to Gabon, who also had a point deducted for using an ineligible player, on an artificial pitch in Atlantic port Pointe Noire.

In group C, Ivory Coast face The Gambia and will be eager to put their disappointing Nations Cup campaign behind them.

The highly fancied Elephants failed to live up to their pre-tournament billing once again - this time beaten in the quarter-finals by Nigeria - and there have been some big-name casualties as a result.

Didier Drogba has been dropped, with coach Sabri Lamouchi saying the striker must regain match fitness, and five other Ivorians who were in South Africa have also been left out.

Lamouchi himself might be considered fortunate to keep his job after many called for him to resign. He will be eager to secure a win at home that would give Ivory Coast a commanding seven points from three games, to ease the pressure.

In Group A South Africa are struggling on two points from two games, and a defeat against a talented Central African Republic team at home would be a huge blow to their chances.

Bafana Bafana also have problems in defence - they must find new centre-backs for the match in Cape Town with captain Bongani Khumalo axed and Siyabonga Sangweni both injured.

Cameroon are in perhaps the toughest group - group I - which contains Libya, Togo and Democratic Republic of Congo. They've won one and lost one so far, so need a victory at home to Togo to increase their chances of qualifying for the World Cup.

The Indomitable Lions will be without injured defenders Aurelien Chedjou and Dany Nounkeu but Spurs' Benoit Assou-Ekotto will play his first official game for Cameroon since 2010.

Guinea will host the Group J match between Senegal and Angola as the Lions of Teranga are banned from hosting matches following the crowd trouble that forced the mid-match abandonment of their 2013 Nations Cup qualifier against Ivory Cost.

Senegal lead the group J by two points and will look to consolidate their position when the face Angola.

But the Lions of Teranga must play their home match against Angola in neutral Conakry, Guinea because of a year-long home ban in place following crowd trouble that forced the mid-match abandonment of their 2013 Nations Cup qualifier against Ivory Cost.

Malawi travel to Windhoek to take on Namibia in Group F but interim coach Edington Ng'onamo will be missing. He has flown home following the death of his sonwho was suffering from cancer. The match against the Brave Warriors would have been Ng'onamo's first in charge of Malawi on his return to the top job. A good result for him would have boosted his chances of securing a contract at the end of June.