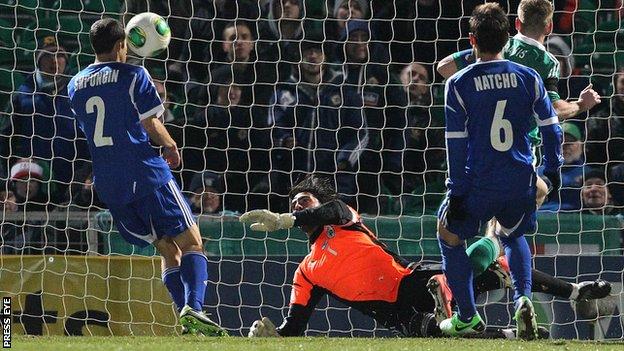 Michael O'Neill is still without a win as Northern Ireland boss after a World Cup qualifier defeat by Israel.

Israel striker Itay Shechter hit the woodwork after two minutes before Steve Davis was denied by a superb Dudu Aouate save as the hosts took control.

The visitors struck twice late in the game as Lior Refaelov fired into the bottom corner before Eden Ben Basat's classy shot into the roof of the net.

His team should have been the fresher after their qualifier against Russia on Friday was postponed, while Israel had played out a 3-3 draw with Portugal that night.

However, the visitors threatened first when a neat short corner move ended with Swansea's on-loan striker Shechter volleying against the post from close range.

Israel failed to build on their early chance and Northern Ireland began to take a grip on affairs after a scrappy opening 20 minutes.

Davis played in Martin Paterson but Aouate raced out to beat the Burnley striker to the ball while a powerful Chris Brunt effort was diverted wide.

The returning Paterson was the creator on 31 minutes as his low cross was met by Davis, but Aouate made an excellent point-blank save and Shane Ferguson's weak follow-up header was cleared.

Northern Ireland were looking dangerous and Gareth McAuley's low cross flew across the goalmouth but failed to find a connection.

Israel tested Roy Carroll for the first time early in the second half, when Maor Melikson was given space by Ben Basat's pass but fired straight at the Olympiacos keeper.

Northern Ireland failed to maintain the momentum gained before the break and they were reduced to long-range efforts.

The breakthrough came 13 minutes from time and there was a touch of fortune in Israel's opener.

The ball was aimlessly poked through but it broke for substitute Refaelov, who sent his shot across Carroll and into the bottom corner.

There was no luck involved in the second goal seven minutes later, with Shechter cutting back for Ben Basat to calmly side-foot beyond Carroll from 12 yards.

It was a rare bit of class in dour encounter and a shell-shocked Northern Ireland failed to muster a response, while Brunt's injury-time booking means the midfielder will miss the next qualifier.

Northern Ireland remain on three points from five qualifiers while O'Neill's win-less run at the helm stretches to nine matches.