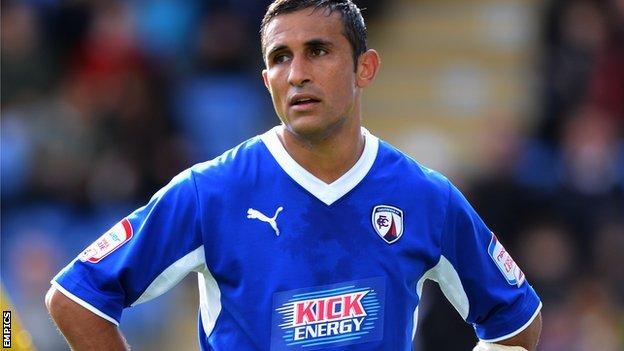 Chesterfield striker Jack Lester is to leave the club when his contract expires at the end of the season.

The 37-year-old joined the Spireites from Nottingham Forest in 2007 and has scored 83 goals in 194 league appearances.

Chief executive Chris Turner had said in January that he was confident of sorting a new deal for the veteran.

But Lester told BBC Radio Sheffield: "I was told on 1 February that I wouldn't be here next year."

I would have loved to have ended on a promotion but I won't leave the club bitter. I have a great fondness for the club and always will

He continued "I was disappointed and I took it badly because I wanted to stay.

"It wasn't a surprise because I haven't really played that much under the new manager [Paul Cook].

"I would have loved to have ended on a promotion, but I won't leave the club bitter. I have a great fondness for the club and always will."

Lester helped Chesterfield to promotion from League Two in 2010/11 and was part of the squad that lifted the Johnstone's Paint trophy last season.

The former Grimsby, Sheffield United and Forest player is uncertain whether he will continue playing beyond the end of the season.

"I'm not sure what I'll do next year but I still think I have something to offer," he added.

"I'll definitely be involved in football. My passion is still there and the game fascinates me.

"I suppose now this has been announced then people will ask what I'm wanting to do and there might be an offer there."