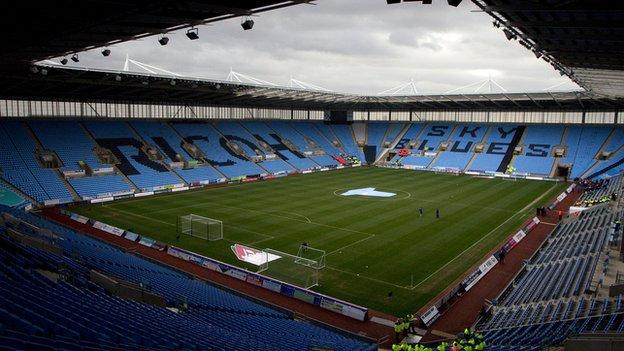 Coventry City Football Club Holdings says a non-operating subsidiary of the club has been put into administration.

It comes the day before Coventry and owners Sisu are due in London's High Court to face an administration order.

The application is from Arena Coventry Limited, who manage the Ricoh Arena for joint owners the Alan Edward Higgs Charity and Coventry City Council.

A spokesman for the club said: "It is important to stress that the football club itself is not under threat."

The Coventry spokesman added: "This is merely a property subsidiary which owns no material assets and has no employees, on or off the pitch.

"The club can confirm that all staff wages, PAYE and all other creditor commitments will continue to be met as before by Coventry City Football Club Holdings.

"Unlike other instances of clubs being taken either wholly or partially into administration, there are no HMRC or VAT implications and the football club will continue to trade as normal without interruption.

"Our main objective now is to remain competitive on the pitch and give Steven Pressley and the playing staff our full backing and commitment."

However, Friday's date with the High Court could result in the whole operation being placed into administration.

It is claimed that the Sky Blues owe over £1.3m to ACL in unpaid rent stretching back a year.

The row has seen their bank accounts frozen, while earlier this month Coventry were placed under a transfer embargo having failed to file their annual accounts on time.

Coventry face a 10-point deduction if they go into administration.