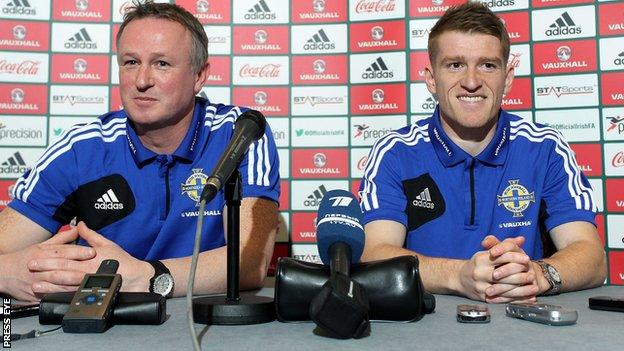 Northern Ireland captain Steven Davis wants his side to hit Russia with the same type of display that took them to the brink of victory in Portugal.

Davis and company defied the odds to claim a 1-1 draw in Porto in October but then slipped to a disappointing home draw against Azerbaijan.

"We will use our performance in Portugal as the benchmark," added the Southampton player.

"Giving the fans a night like that game in Portugal was a massive lift but we won't underestimate just how tough it is going to be against Russia.

"The performances have been good without getting a little bit of fortune along the way."

Michael O'Neill's side went close to shocking the Portuguese in Porto despite having little possession.

Davis knows full well that the Russians may have the ball for most of Saturday's contest at Windsor Park - just as was the case in Moscow last September when Fabio Capello's side won 2-0 - but the Irish skipper still believes that the home players can trouble the visitors.

"When we played in Russia we didn't see a great deal of the ball and that might be the same again, so when we do get chances we know we are going to have to be clinical."

But the midfielder is far from despondent about the way the team are shaping up.

"When you take a step back and analyse our games, we are definitely progressing," he said.

"We have been disappointed not to win during the group but when you look at performance levels, they have been good.

"The one thing we have been missing is perhaps a bit of fortune.

"But if we keep playing in the same way with the same commitment, desire and shape, it will come."