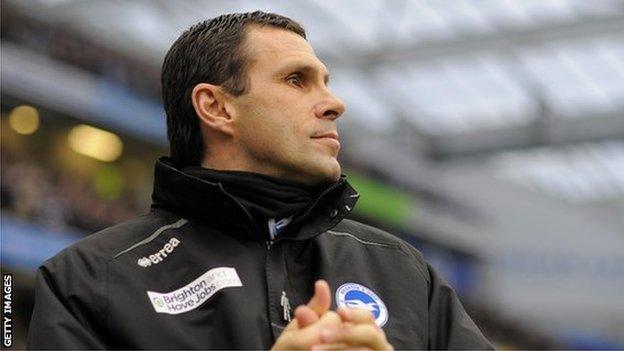 Brighton boss Gus Poyet has opted to stay at the Championship club after holding preliminary talks to discuss the vacant manager's post at Reading.

The 45-year-old is understood to have met officials from the Premier League club on Wednesday morning before flying to the Caribbean for a holiday.

But having asked for time to consider his options, Poyet has told Brighton he is committed to the club.

Gus Poyet has been the manager of Brighton since November 2009, taking charge of 184 matches. During that period his side have won 82, drawn 54 and lost 48 times.

McDermott, 51, led the club to promotion last season, but four successive Premier League defeats left the Berkshire club four points adrift of safety at the time of his departure.

Poyet's decision leaves former Southampton manager Nigel Adkins as the leading contender for the Reading post, despite complications over his settlement with the south-coast club.

Adkins has been on the shortlist from the start of the search to replace McDermott and the Royals remain keen to appoint a new manager before next weekend's Premier League match with Arsenal.

And former Reading captain Adrian Williams is a firm admirer of the ex-Scunthorpe boss.

"I love the way Southampton played football. He did his apprenticeship, was a physio, became a manager and hasn't looked back.

"He is a calm individual and hugely respected. He is similar to Brian McDermott and the 'Reading way', but do Reading want to continue with that?"

There also remains the possibility that caretaker manager Eamonn Dolan could be left in charge until the end of the season. Dolan took charge of the side that lost 1-0 to Manchester United on 16 March.

Brighton are seventh in the Championship, with only goal difference currently keeping them out of the play-offs.