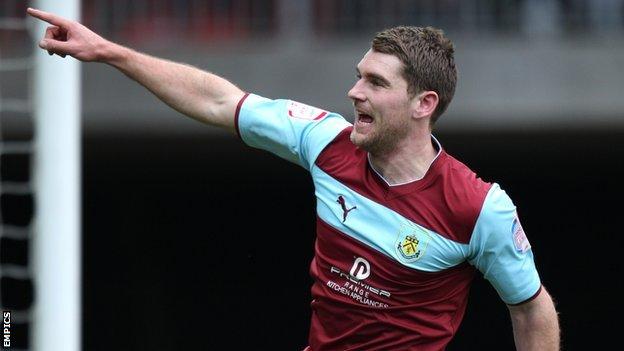 Sam Vokes rescued a point for Burnley in injury-time as Watford missed the opportunity to move into the top two.

The Clarets' Charlie Austin struck from six yards after 40 seconds, before Troy Deeney levelled with a fine strike.

But Austin then scored a penalty, his 28th goal of the season, after Marco Cassetti's foul on Alex Kacaniklic.

Fernando Forestieri levelled after a jinking run and his curled finish made it 3-2 before Vokes struck late on from close range to level the game.

Austin's early opener came when Ross Wallace's initial shot was blocked, the ball falling perfectly for the striker to tuck in the rebound.

The lead lasted only five minutes before Ikechi Anya fed Deeney, who smashed in a fine equaliser from the edge of the area.

Charlie Austin, who struck after only 40 seconds, now has 28 goals this season following his brace on Friday

Clarets goalkeeper Lee Grant then pulled off a decent save to deny Forestieri before Austin struck again, firing his penalty down the middle and into the roof of the net.

Burnley let their lead slip again within five minutes. This time centre-half Fitz Hall was the unlikely creator, playing in Forestieri, who jinked inside Jason Shackell in the area before rifling his angled shot past Grant.

Deeney then hit the crossbar with a lob in stoppage time and the sides went in to the break at 2-2.

Forestieri found a way through midway the second half when he curled in a cross from Cristian Battochio.

That looked like being enough to ensure Watford leapfrogged Hull into the automatic promotion places, until Vokes latched on to Austin's header in injury-time and slotted in the equaliser.

"We came back from behind twice and then went ahead, and towards the end I didn't see that coming, but it's not the first time that has happened.

"A sloppy piece of defending costs us a lot. I understand we have a very young team, but there's not much time for them to learn, we need to grow up quickly.

"We have done very well so far and it would be a shame not to finish what we have done.

"Now is the time we cannot give anything away, every single game is going to be very difficult."

"I do take great satisfaction in the manner we performed and in the way we got a point after a ding-dong Championship clash.

"I thought the game fluctuated around mistakes to be honest. Charlie (Austin) is a player with goals in him, and I thought he could have had a couple more.

"But I'm not frustrated. Watford are a very good side. They've got every chance."