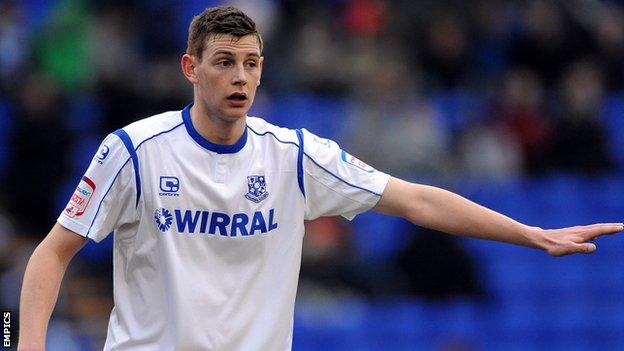 Sheffield United leapfrogged Tranmere in the League One play-off places as Ash Taylor's own goal settled an often scrappy encounter at Prenton Park.

United's Jonathan Forte forced Owain Fon Williams to a fine diving save, but clear chances were few and far between.

The deadlock was broken just before the interval when a Tony McMahon shot was deflected into his own net by Taylor.

Rovers tried to raise the tempo after the break, but United came closest when Ryan Flynn's 30-yard shot hit the bar.

And they had another chance to double their lead when Barry Robson's drive was tipped over the bar by Fon Williams.

The home side introduced Adam McGurk as a substitute for his first appearance since suffering a collapsed lung and he had a shooting chance in the closing minutes, but a partial block took the pace off it and it was a easy for goalkeeper George Long.

The victory moved United up to fifth in the table, with games in hand on each of the sides above them, while Tranmere clung onto their place in the top six by virtue of Yeovil's inability to beat Walsall at home, the game ending goalless.

"To lose a game on such a mistake is just one of those things. Unfortunately for us, we've paid the price for it.

"If you're a defender, you should know what's around you. You should know you've got time to have two or three touches. You can't slash at the ball there.

"It was scrappy and a battle. I can't complain about the effort and commitment. Sheffield United did the dirty things well. We're a young side and we have to learn some of the old tricks that they've done well."

"We always had the belief we could do that [bounce back from the 4-0 defeat by Stevenage].

"We look back at that game now with a little bit of surprise about the scoreline. We just couldn't believe it happened.

"Then when you see us today, you think 'is that the same team that played at Stevenage' and I have to say it wasn't.

"But what a way to respond, against a team that's your nearest rivals and win at their place. It's a big bonus for us."