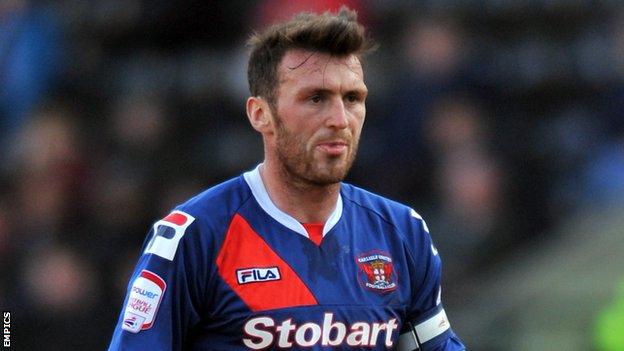 Carlisle's Lee Miller twice equalised from the penalty spot as they earned a point at home to Shrewsbury.

But Miller equalised two minutes later, thundering home a penalty after the referee spotted a handball in the area.

Yado Mambo scored from a yard out after Gillespie failed to gather a cross, but Miller put away a second penalty after being felled by keeper Chris Weale.

Miller has now scored four goals in his last two games as the draw saw both sides edge closer to League One survival.

Shrewsbury, in 18th, are now five points clear of danger, with just six games left - two points and one place behind Carlisle.

"Today is a missed opportunity. I am disappointed about how they were allowed to get at us twice after we had taken the lead.

"The referee was totally unsighted for the second penalty.

"He didn't have a clear picture of it, so I am not too sure how he can make a decision like that - but our downfall was getting ourselves into those positions so soon after scoring".

"We have to start scoring from now until the end of the season. Today is a point, but it feels like we lost."