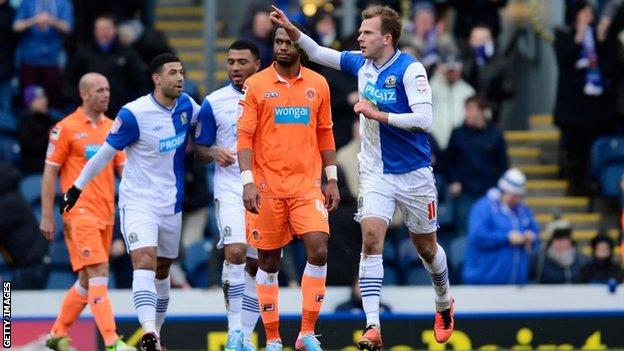 Jordan Rhodes earned Blackburn a draw with Blackpool as both sides moved five clear of the relegation zone.

David Dunn failed to hit the target with two first-half chances and Matt Phillips fired just over for Blackpool.

Gary MacKenzie put the visitors ahead after the break with a close-range finish following Tom Ince's corner.

But Rhodes headed in from Todd Kane's ball to earn a point for Rovers in their first game since Michael Appleton's shock dismissal.

Out of form Lancashire sides

Appleton left Blackpool in January after only 57 days to join Blackburn, but lasted just 10 days more than that at Ewood Park.

Both of Appleton's former sides started the game four points above the drop zone in what was Gary Bowyer's first in charge since beginning his second spell as caretaker boss at Blackburn.

It was also Blackpool manager Paul Ince's first return to Ewood Park since he was dismissed as Rovers boss in 2008, but it was the hosts who got off to a better start with Dunn skimming the top of the net before shooting wide.

The Seasiders finished the first half strongly as Phillips' long-range effort whisked past the post with Blackburn goalkeeper Jake Kean furious with his defence for not closing the forward down.

The hosts started the second half more brightly and had two early chances, with David Jones squandering the first when he rounded Gilks only to fire over.

Shortly after, Kane crossed for Josh King, but his volley went into the ground and spun over the bar before Blackpool responded with Ludovic Sylvestre forcing Kean into a decent stop.

Then the opener came for the visitors just after the hour as Ince's corner was headed at the back post by Alex Baptiste. Kean pushed the ball away but on-loan MK Dons defender MacKenzie controlled and finished from three yards.

That strike looked set to prolong Blackburn's recent woes, but Rhodes dived in with 11 minutes remaining to ensure the points were shared.

"To their credit they got on with their work and had a right good go.

"I thought we started nervously which was to be expected a little bit with what's gone off at the football club, but once they settled down they showed a good composure to make some passes."

"It's a fair result.

"The first half was poor really, the players got involved in the occasion rather than actually playing the game - it was all about headers and tackles and getting knockdowns.

"Second half they've had two good chances and Gary will be disappointed for one of them not to go in.

"Once we got the goal I was thinking we were going to go on and win it comfortably.

"Instead of staying on the front foot, which got us the goal in the first place, we started defending deeper and deeper."