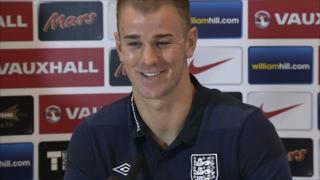 England goalkeeper Joe Hart jokes that he doesn't want to concede against San Marino in Friday's World Cup qualifier against San Marino, who have not scored a single goal since a 2004 friendly against Liechtenstein.

England currently lie second in Group H, two points behind leaders Montenegro whom they face on Tuesday evening in Podgorica.