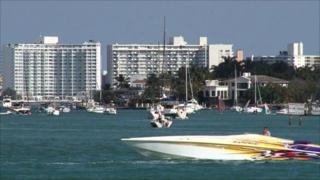 Andy Murray on life in Miami

Andy Murray discusses his life in Miami ahead of the Miami Masters, revealing he would like to climb even higher in the world rankings.

The world number three says training in the heat and humidity of Florida helps him condition his body to extreme temperatures, which is of benefit later in the season.

Murray faces rising star Bernard Tomic of Australia in the second stage of the tournament, having received a bye through the opening round.