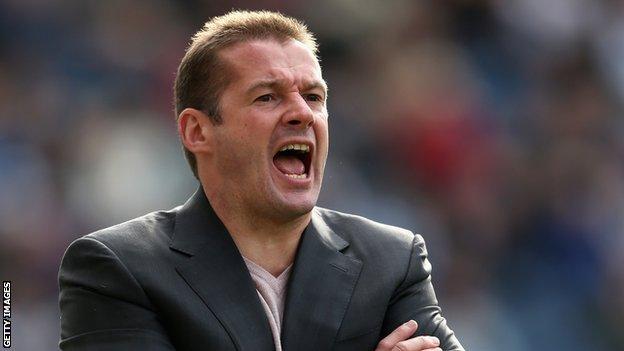 Stevenage player-caretaker manager Mark Roberts has said the possibility of Graham Westley returning as boss has not been considered by the squad.

Westley, who has had two previous spells as Boro boss, is the favourite to replace

The 45-year-old is out of work after being dismissed by Preston in February.

"I've tried to distance myself from that and tried to get the players thinking about Sunday's game," Roberts told BBC Three Counties Radio.

"The focus of winning against Tranmere on Sunday started as soon as we came in for training on Thursday."

Westley's most recent stint in charge of Stevenage proved to be the most successful period in the club's history.

He led the Hertfordshire side to back-to-back promotions from the Blue Square Bet Premier to League One, before leaving for Preston in January of last year.

Smith made a strong start to his tenure when the club reached the League One play-off semi-finals, but he was sacked on Wednesday following a run of 14 losses in 18 games, and Westley leads the running to be appointed at Broadhall Way.

"I'm sure a lot of people are speculating, not just about Graham. There are a lot of other worthy people for the job," said Roberts.

"So many good managers are out of work and the opportunity at this football club is a good one.

"It's an excellent League One football club with excellent facilities. There's lots of positives at this club and whoever comes in will have a great squad to work with."

Defender Roberts, 29, finds himself in caretaker charge for the second time after he took over temporarily between the Westley and Smith reigns.

But he has ruled out the prospect of stepping into the role permanently.

"I'm fully concentrating on playing. When the chairman asked me I felt like I could do a good job and get the very best out of the lads.

"I work alongside them, I know what makes them tick."