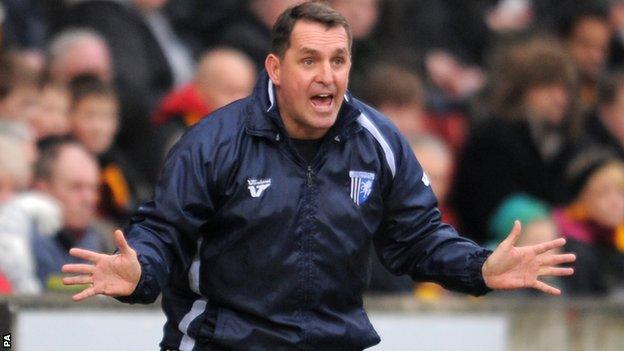 The Gills have drawn their last three matches, are five points clear and have been in the top two since 27 August.

"I had a wonderful letter, it did make me smile," Allen told BBC Radio Kent.

"I write back to everybody but the person that wrote this letter never put his name - what a shame. If he'd put his address I would have gone straight round for a chat over a cup of tea."

Despite their hat-trick of draws, the Gills are eight points ahead of fourth-place Cheltenham with only seven games left.

"Jeffers has great ability, he can score goals and you never lose that skill," Allen said.

"Accrington are a cornered team that are dangerous, they'll bite and snarl and come after us.

"It's up to us to stand up to it - I told the players in July we would get promoted and it was just a matter of when.

"I've genuinely believed that from day one. I just knew."