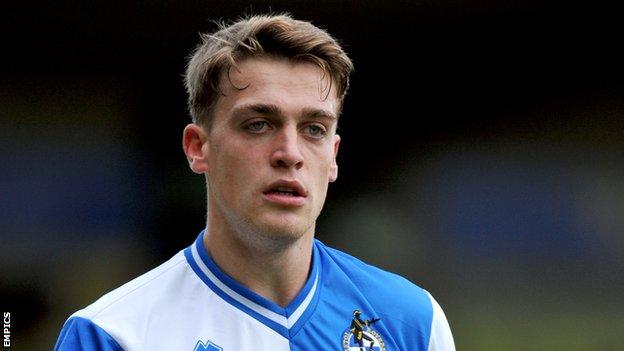 Bolton Wanderers striker Tom Eaves has extended his loan deal with League One relegation battlers Shrewsbury Town until the end of April.

The 21-year-old, 6ft 3ins forward has scored three goals in six games since arriving in February, but will be subject to a 24-hour recall.

"I've settled in well with the lads and I've got a soft spot for the club," said Eaves. "I've had a great time."

Eaves' loan is due to end on 27 April, but may be extended for the final game.

The big target man, who hit seven goals in his first loan spell away from Bolton at Bristol Rovers earlier this season, admits that he has learnt a lot during his first month at the Meadow from Town boss Graham Turner.

"I've got nothing but respect for him," Eaves told BBC Radio Shropshire. "I just listen to everything he says.

"In his pre-match talks he gets us fired up for games. You can tell he's an expert in doing that."

Despite not having so far made a senior appearance for Bolton, Eaves is contracted until 2016 at the Reebok Stadium.