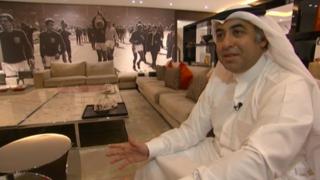 Davies 'can be Forest's Ferguson'

BBC Late Kick Off Midlands was given exclusive access to the trip to the Persian Gulf, and Al Hasawi told reporter Natalie Jackson that he wants Davies to restore Forest to the top flight of English football - and manage at the City Ground for many years to come.

Late Kick Off Midlands is on BBC One at 22:55 GMT on Sunday, and on the BBC iPlayer from Monday morning.