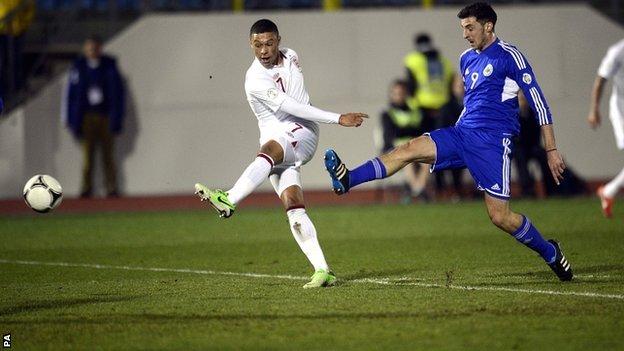 England manager Roy Hodgson says his side's 8-0 win over San Marino has given him a selection dilemma ahead of the trip to Montenegro on Tuesday.

England made light work of their opponents in the World Cup qualifier, but they will face a sterner test against the Group H leaders.

Hodgson rested a number of normal starters to keep them "fresh".

But he said he would "think twice about what team we select because there were some good individual performances".

Jermain Defoe scored twice as England matched their best result for 26 years after beating Turkey 8-0 in a 1987 European Championship qualifier at Wembley.

Hodgson's side established a 5-0 lead at half-time after an own goal was followed by strikes by Alex Oxlade-Chamberlain, Defoe, Ashley Young and Frank Lampard.

Wayne Rooney then scored his 35th England goal from a curling free-kick before Daniel Sturridge and Defoe added to the scoreline in a triumphant victory.

It capped a positive night for England, whose only problem came before the match kicked-off with Theo Walcott suffering a pelvic muscle strain.

Hodgson told BBC Radio 5 live: "It was nice to come away having won it comfortably, not having had any injuries or yellow cards and going to Podgorica with a lot of confidence because in the last couple of games the way we have played has been very good and we have done it against two teams as diverse as Brazil and San Marino."

England captain Steven Gerrard, Ashley Cole, Glen Johnson and Danny Welbeck all started in the 2-1 win over Brazil in February, but they were rested against the Group H minnows, with Michael Carrick also a potential addition for the Montenegro game.

The England manager added: "In the first half we literally didn't put a foot wrong, I think there were some excellent moves and some excellent goals and I was concerned the second half might die a death but it didn't.

"We kept going, we made the changes early on and gave more players a chance to show what they could do and I thought everyone who has come off the field, they have to feel happy with their performances because, quite frankly, I don't think there was anything I could criticise.

"I've got to say in the second half, and even in the first half, the important thing was to win the game and the goals were a bonus. But more important than the goals was the way we played, the movement, the passing, the way we moved the ball around.

"Obviously we are doing it against an opponent who find it hard to compete with us at this level because we have so many better players, but you can't do more than play in the correct way and to do the things that you set out to do."

Defoe's goals were his first of 2013, but Hodgson added: "We know what Jermain can do. I had no doubt in my mind that if he played he would score and sure enough he got two and could have had more."