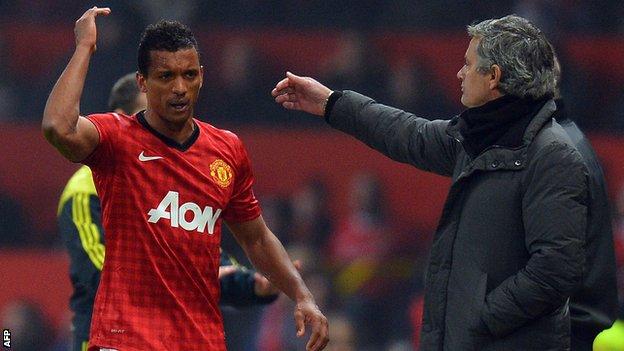 Manchester United midfielder Nani has been suspended by Uefa for one match.

The Portuguese was in the second leg of their Champions League last-16 tie earlier this month.

Nani will miss United's first game in the 2013-14 Champions League, if they qualify for the competition.

Their manager Sir Alex Ferguson has also been fined £8,500 for failing to speak to the press after the game.

"Manchester United FC midfield player Nani has been suspended for one match by UEFA's Control and Disciplinary Body, following the red card he received at the UEFA Champions League round of 16 second leg against Real Madrid CF at Old Trafford on 5 March," a UEFA statement confirmed.

"Manchester United head coach Sir Alex Ferguson has been fined €10,000 for non-fulfilment of the post-match media obligations at the same match."

United looked on course for a quarter-final place, leading 1-0 in the second-leg match and 2-1 on aggregate, until Nani's controversial red card for a foul on Real Madrid defender Alvaro Arbeloa.

After Nani's 56th-minute dismissal, goals from Luka Modric and Cristiano Ronaldo turned the game around with Madrid winning 2-1 to seal a 3-2 aggregate victory.