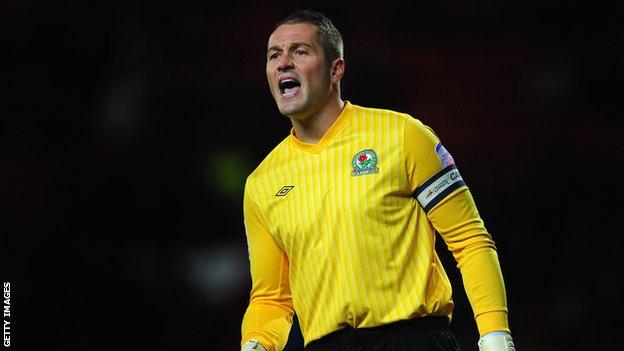 Blackburn Rovers goalkeeper Paul Robinson will be out of action for at least six months after developing a blood clot in his lung.

The 33-year-old suffered complications following a back operation, but is now back home after being treated in hospital on Sunday.

Robinson, who won 41 England caps, has not made a first-team appearance since December.

Fellow keeper Jake Kean is also sidelined because of a knee injury.

Poland international Grzegorz Sandomierski, who made his Rovers debut as a substitute against the Championship leaders on Monday, is Blackburn's only available senior keeper ahead of Saturday's crucial trip to Sheffield Wednesday, another side threatened with relegation.

Former Leeds and Tottenham man Robinson joined Blackburn from Spurs in 2008 for £3.5m and has started 172 times for Rovers.

But he and his last appearance came in a 4-1 home defeat by Cardiff on 7 December.

during the January transfer window, but a move did not materialise.

The form of youngster Kean has been one of the rare bright spots in a turbulent second half of the season for Blackburn, who are

However, the 22-year-old was stretchered off in the second half of the and scans have confirmed he tore the cartilage in his left knee.

He will miss the final seven matches of the campaign, but is expected to be fit for the start of next season.