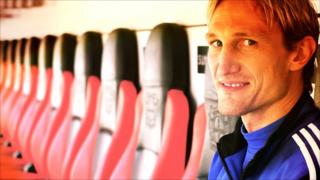 The Finn played for Leverkusen after leaving Liverpool in 2009, and moved into coaching the club last year - sharing duties with Sascha Lewandowski as Hyypia does not have his licence yet.

The 39-year-old reflects on his time at Anfield with "joy" and says he learnt the most from former Reds manager Rafael Benitez.

EFL: Two games in Championship plus key matches in League One and Two