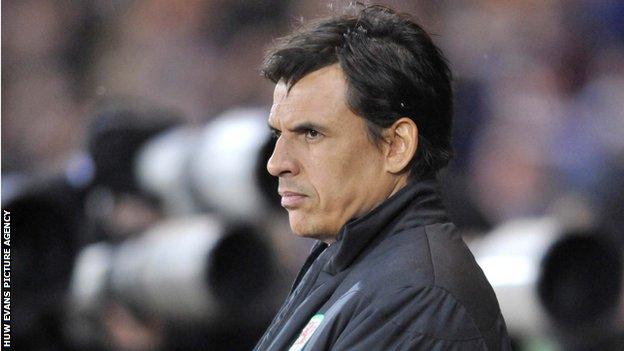 Grant Hanley put the Scots ahead before Wales replied with an Aaron Ramsey penalty and a Hal Robson-Kanu header.

"I said at half-time keep it simple and we did it. We got back to it in the second half and we got our rewards," said Coleman.

The Wales boss felt his side "over-complicated" their approach, but his message to simplify their game-plan paid off.

"After the first 30 minutes we dominated, we were patient, we moved the ball around and tried to move Scotland around," he added.

This win means Wales have done the double over the Scots in the 2014 qualifying campaign, having beaten them 2-1 in the first game at the Cardiff City Stadium.

Wales are now third in Group A, seven points behind second-placed Croatia, who they host in Swansea on Tuesday.

Hanley gave the home side the lead against the run of play with a header from a Charlie Mulgrew corner in first-half stoppage time.

Wales replied with a Ramsey penalty on the 70th minute when Scotland forward Snodgrass was shown a second yellow card for a challenge on Chris Gunter inside the home penalty area.

After Ramsey had levelled from the spot, Robson-Kanu headed in the winner just over a minute later, but former Wales captain Ramsey was later shown a straight red card for a last-man tackle on James McArthur.

Coleman has no illusions as to the importance of the game in Wales' bid to reach the finals in Rio de Janeiro next year.

"If we'd have lost questions would have been asked of me again," said Coleman.

"We've got to pull ourselves back together for the big one down in Swansea on Tuesday."