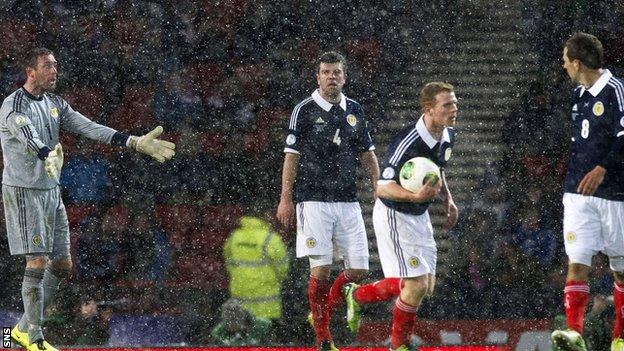 Gordon Strachan did his best to remain upbeat despite experiencing defeat to Wales in his first competitive match as manager of Scotland.

His side remain bottom of World Cup qualifying Group A on two points.

"It's not great," Strachan told BBC Scotland. "But I'm looking forward to the challenge.

"One or two of the lads can be pleased with that; some will need to go back, think and say 'next time I get this opportunity I'll have to take it'."

And he added: "There's not many of us who have had this job and until you get beaten you can't really say how it feels."

Despite starting the game poorly, Scotland went in at the break leading thanks to Grant Hanley's headed goal from Charlie Mulgrew's corner in first-half stoppage time.

Robert Snodgrass hit the post with an outswinging left-foot effort at the beginning of the second period but then conceded a penalty for a unnecessary foul on Welsh right-back Chris Gunter.

Snodgrass received a second-yellow and Aaron Ramsey converted the spot-kick.

It went from bad to worse for the hosts at Hampden when Hal Robson-Kanu rose to head home Andy King's right-wing cross a minute later.

"It changed at the penalty, that's for sure," Strachan said.

"At that point in the game we were comfortable, I didn't think there was any real danger. If we'd got the second goal, which we'd threatened to do for 20 minutes, I thought the game would be ours.

"But fair play to Wales, they made us dive into a tackle and scored the penalty. And because of that I think we were a bit stunned.

"We were trying to reorganise and I think if we had gone another couple of minutes we could've reorganised better, but we didn't have that opportunity."

Steven Fletcher only lasted four minutes of the match, needing to be substituted for Kenny Miller after an aerial clash with Wales' Ben Davies.

And Strachan felt that early change affected his side.

"After the initial 20 minutes we were spooked with the injury to Steven Fletcher and we had a midfield that's never played together," he said.

"But we started finding space, got confident with each other and got better.

"I think he [Fletcher] just went over on his ankle coming out the air. We really feared it was a real bad one but he's having it assessed just now and he'll got back to his club and have it assessed. But he's looking a bit more relaxed than he did."

Scotland now travel to Serbia for their next World Cup qualifier on Tuesday.

"What we must do is keep the enthusiasm and the confidence high to do what we're going to try and do," added Strachan.

"Winning makes you feel better that's for sure. But if we'd won tonight we'd still look and see what we needed to do better."