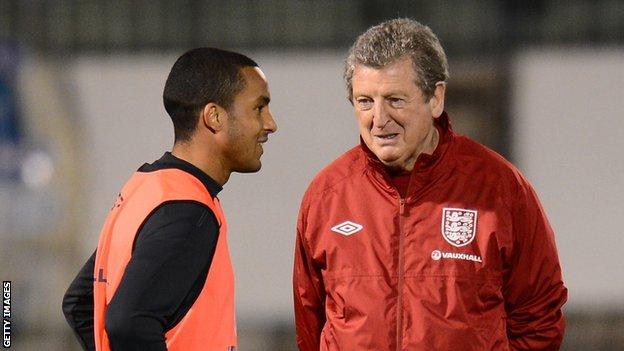 England and Arsenal winger Theo Walcott is set to be sidelined for up to 10 days through injury.

The 24-year-old suffered a pelvic muscle tear in England training on Thursday and missed Friday's 8-0 win against San Marino.

Walcott will not play in Tuesday's World Cup qualifier in Montenegro and is a doubt for Arsenal's Premier League home fixture with Reading on 30 March.

"He immediately felt a slight problem in the pelvic area, went straight off the pitch and had a scan on Friday morning. It showed a slight tear in the pelvic muscle."

Walcott will fly back to England on Saturday to be assessed by Arsenal's medical staff.

Hodgson started with Wayne Rooney and Jermain Defoe in attack against San Marino, with Ashley Young and Walcott's Arsenal teammate Alex Oxlade-Chamberlain on the wings. All four scored in the comprehensive victory.

England are second in Group H with 11 points, two behind unbeaten leaders Montenegro, who defeated Moldova 1-0 on Friday.