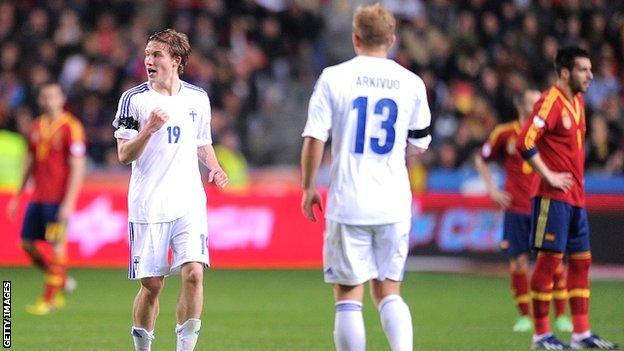 Defending world champions Spain are in danger of missing out on automatic qualification for Brazil 2014 after a 1-1 home draw with Finland left them two points adrift of France in Group I.

Teemu Pukki stabbed home on the counter in the 79th minute to cancel out Sergio Ramos's opener and silence the crowd.

Spain must win away to France on Tuesday to put themselves back on course to avoid a play-off.

Should Spain fail to overhaul France at the top of Group I in their remaining four matches, they are likely to face one of the other seven group runners-up in a two-legged play-off in November.

In line for the play-offs: second-placed teams as it stands

The second-placed team with the lowest points tally in the nine groups will not make the play-offs.

It was an unfamiliar Spain line-up without the injured Iker Casillas and Carles Puyol, as well as rested midfielders Xavi and Xabi Alonso.

The hosts dominated throughout but the late Finnish leveller prompted a tense finale where tempers almost boiled over following a goalmouth scramble.

"It seems impossible that after dominating the game we lost our concentration. We have four games ahead of us and we have to keep fighting. There are still a lot of points in play," said Spain boss Vicente Del Bosque, after his side's draw against a team ranked 86 places lower in the Fifa world rankings.

Portugal and their captain Cristiano Ronaldo also have work to do if they are to feature in the finals.

They are third in Group F, four points off leaders Russia having played a game more, after an injury-time goal from Fabio Coentrao secured a 3-3 draw and a point from their match away to second-placed Israel.

Elsewhere, Croatia beat fierce local rivals Serbia 2-0 in Zagreb thanks to goals from Mario Mandzukic and Ivica Olic. Away fans had been banned from travelling to the match because of security fears.

Their victory meant that they kept pace with Belgium at the top of Group A. Chelsea pair Kevin de Bruyne, currently on loan at Werder Bremen, and Eden Hazard scored the goals as a Belgian starting XI that featured eight players owned by Premier League clubs beat Macedonia 2-0.

Another former Yugoslav republic, Bosnia-Hercegovina, are on track to qualify for the finals for the first time after Manchester City striker Edin Dzeko scored twice in a 3-0 win over Greece to open up a three-point advantage at the top of Group G.

Robin van Persie, who has failed to score in his last seven matches for Manchester United, found the net for his country as the Netherlands made it five wins from five matches in Group D with 3-0 win over Estonia.

Germany eased aside Kazakhstan by the same scoreline in Astana with goals from Bayern Munich pair Bastian Schweinsteiger and Thomas Mueller coming either side of Mario Gotze's effort.