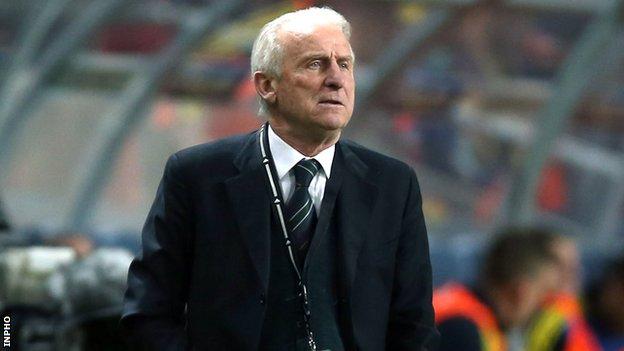 Republic of Ireland manager Giovanni Trapattoni heaped praise on his players after their 0-0 draw against Sweden in Friday's World Cup qualifier.

"The team played with confidence and personality," said the Italian, 74, after the game in Stockholm.

"We deserved the result. The performance was very, very good. Particularly (James) McCarthy and (Seamus) Coleman.

"In the last 30 minutes, I thought we could have even achieved a victory."

Paul Green is under-estimated by the media

"All the players were playing very well but I tried to force the situation with Hoolahan, Sammon and Andy Keogh because I thought we could score with the fresh players."

Trapattoni's original team selection on Thursday did not include McCarthy but the Wigan playmaker went on to produce a man-of-the-match display after replacing injured Glenn Whelan before the start.

"James is improving every game. Psychically and technically he is perfect. He is a little bit shy. I said to him:'You must speak (more)'.

"He can command the play. I am very happy with him. He can be a very, very important player for us."

Trapattoni also lauded the efforts of the much-maligned Leeds midfielder Paul Green who provided a crucial defensive shield for the Republic in Friday's game in the Friends Arena.

"Paul Green is under-estimated by the media. James (McCarthy) played very well but with the support of Paul. This combination is very good."

Trapattoni added that Friday's result would give his squad "confidence" for Tuesday's home clash against Austria in Dublin.