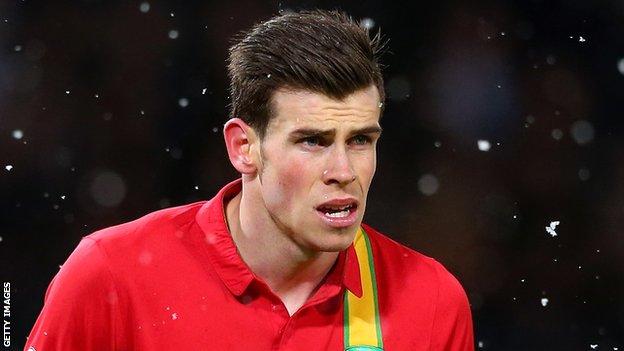 Wales winger Gareth Bale says he "should be OK" to face Croatia on Tuesday despite being removed at half-time in the 2-1 win against Scotland.

Bale, 23, starred in the early stages of the World Cup qualifier despite his pre-match preparations being disrupted by a virus and ankle knock.

"Nothing wrong with my ankle. I came off due to the stomach virus. Should be OK for Tuesday," he said on Twitter.

However, manager Chris Coleman said Bale could still be a doubt.

Coleman's comments contradicted that of his player's with the Wales boss adding: "He's had a crack on the ankle. He's probably a little bit weak, or not in terms of physical levels, but he said he was good enough to play so we trusted that.

"I think maybe he was not his self in the first half, that total domination when he gets the ball and just annihilates the opposition, goes past three or four.

"He looked a little bit heavier tonight, which you understand because he's had a tough week. He's not trained; had half a session yesterday, been ill and bad ankle.

"And then he had a crack on his ankle, which he was feeling so we couldn't take the risk and that's why we brought him off."

The build-up to the all-British tie had been dominated by Bale's availability, with the attacker failing to train earlier in the week, and then only doing a light session in Glasgow on Thursday after travelling separately from his team-mates to prevent his illness spreading.

Coleman had insisted he would only play Bale, who has scored 21 goals in all competitions in an excellent club campaign with Spurs, against Scotland if he was fully fit.

There was no signs of any issues in the opening minutes at a snowy Hampden Park as a Bale-inspired Wales dominated before Grant Hanley scored against the run of play for the hosts.

With Bale off the pitch, the game's turning point arrived after the break when Robert Snodgrass was sent off for a second booking as he felled Chris Gunther in the area. Aaron Ramsey stepped up to convert the penalty, with Hal Robson-Kanu heading in the winner shortly after.

Bale's announcement will be a boost to Coleman as he will face Croatia, who his side trail by seven points after their 2-0 victory against Balkan rivals Serbia, without the suspended Aaron Ramsey after his late dismissal against Scotland and the injured Joe Allen.