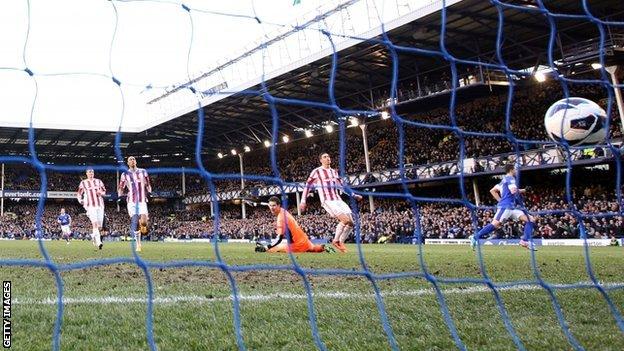 A laboured contest at Goodison Park was lifted when the winger countered from inside his own half before slotting calmly past goalkeeper Asmir Begovic.

Prior to that, Stoke's Jonathan Walters had hit the crossbar from close-range.

Stoke then threatened in the air after the interval but could not find a way past the hosts' solid defence.

Everton have been around the top-five all season, but their bid to return to European competition for the first time since 2009-10 has been hampered by the 12 draws they had registered in the Premier League.

Mirallas's impressive effort meant they closed to four points outside the final Champions League spot after Chelsea's surprise 2-1 defeat at Southampton, while keeping pace with Arsenal, who remain two points ahead in the Europa League qualification position after their 4-1 thrashing of Reading.

With tricky away trips to Tottenham, Arsenal, Liverpool and Chelsea to come, it was vital the Toffees overturned Tony Pulis's struggling Stoke side, who are now four points above 18th-placed Aston Villa after claiming just one win in their last 12 top flight fixtures.

Despite this wretched run of form, Stoke could have scored only a 10th away league strike in the opening minutes when Walters tapped onto the woodwork from five yards after Tim Howard did well to push out a Robert Huth header.

Everton slowly began to edge the physical battle, and should have gone ahead when striker Nikola Jelavic, who has only scored one league goal in 2013, headed straight at Begovic after Stoke failed to clear their lines.

An uninspired match then came to life when Mirallas beat Steven Nzonzi to Howard's punch from a Stoke corner, danced past his retreating opponents at pace, and effortlessly tucked the ball in for his sixth goal in an injury-hampered first season on Merseyside.

The visitors were the first side to threaten in a dull opening after the interval, but defender Huth glanced Glenn Whelan's inswinging free-kick wide as he failed to properly connect with the ball at the back-post.

Everton were warned again when Ryan Shotton spurned the chance to get his second Premier League goal as he headed over Sylvain Distin's stretched clearance while unmarked.

Jolted into life, David Moyes's men picked up the pace once more and went close with two threatening quick-fire free-kicks on the edge of the Stoke penalty area from specialist Leighton Baines and striker Jelavic.

With returning defender Phil Jagielka at the fore, the Toffees then professionally saw out the final stages to claim a victory that left them dreaming of Europe and their opponents dreading a relegation fight.

"You cannot blame the players. Their attitude and application has been absolutely first class.

"It is our fifth year in the Premier League, and it is our best in terms of performances away from home, we just have not got the results. It is a strange game in lots of respects but we have to keep on believing.

"It is difficult times, but it is times you get paid for. I thought we played some smashing football today, and we do not get credit at times for the football we play."