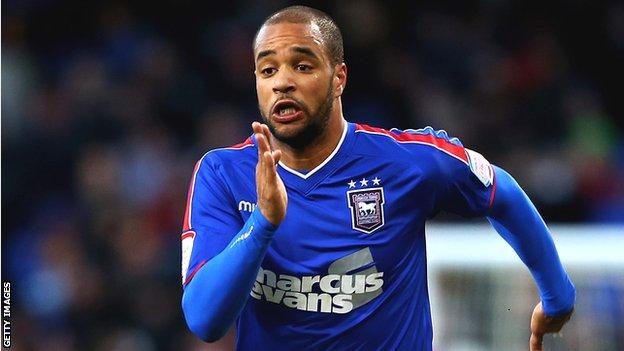 David McGoldrick scored goals either side of half-time to help Ipswich boost their survival prospects with a comfortable victory over 10-man Leeds.

Leeds started well but their progress was checked when Tom Lees was sent off for a high tackle on Jay Tabb.

McGoldrick then converted from close range to open the scoring and the on-loan Nottingham Forest striker made it two with a straight forward header.

McGoldrick has now scored 21 goals this season - 17 during a loan spell at Coventry and four since joining Ipswich, also on loan

McGoldrick flashed an early header wide but Leeds created the first clear-cut chance when Stephen Warnock's corner hit the crossbar and Paul Green's follow-up was cleared off the line.

Loach got down to keep out a well-hit Luke Varney drive before beating away Steve Morison's header from the resulting corner.

But the actions of Lees turned the match, referee James Adcock showing little hesitation in producing his red card after an ill-judged lunge.

Luke Hyam headed Carlos Edwards' cross against the bar and McGoldrick was on hand to nod into an unguarded net.

Kenny prevented McGoldrick from completing his hat-trick, while Loach saved with his legs to deny Morison Leeds full-back Sam Bryam had a powerful header stopped from a Warnock set-piece.

"I'm pleased because it's the first time I can remember when we got away with an ordinary performance. Leeds were better than us, certainly for 30 minutes.

"It was our turn to have a bit of good fortune and the red card changed the game. I don't think anyone could argue against it. It was a sending off, in my view.

"We worked hard. We were under the cosh and there was a time when we would have capitulated but it doesn't happen now. We made saves and blocks, stuck at it and kept a clean sheet until we had opportunities to score.

"The whole league is bonkers and the pressure's starting to tell. You can worry like hell about other results, as I'm sure we all do, but you can only concentrate on your own results and performances."