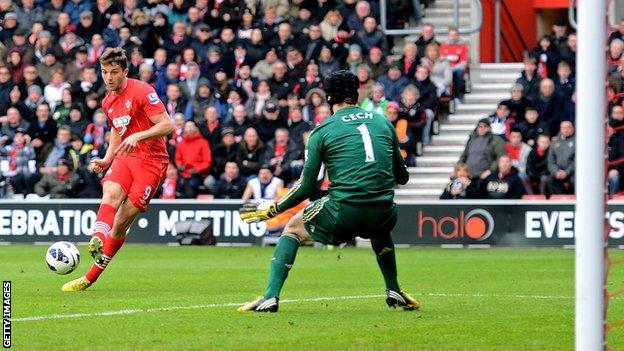 Chelsea's hopes of qualifying for the Champions League suffered a setback as Jay Rodriguez and Rickie Lambert scored to earn struggling Southampton victory.

Rodriguez opened the scoring with a composed 23rd-minute finish after good work by Lambert and SteveN Davis.

John Terry marked his first league start since 2 February by heading a 33rd-minute equaliser from a corner.

Southampton climbed to 13th in the table after establishing a four-point safety cushion from the relegation places, with Mauricio Pochettino's side recording back-to-back league wins for the first time since November.

But while the Saints appear to have hit form at the right time, the same cannot be said of Chelsea.

With visits to Liverpool and Manchester United on the horizon, Blues interim boss Rafael Benitez must find a solution for his team's travel problems if they are to cement a top-four finish.

Southampton fans are singing 'Lambert for England'. The only thing about that is, he is not particularly mobile and not one of those strikers who can get away quickly from an opponent. The international game doesn't always suit a player like that.

Chelsea dropped to fourth in the table, just two points ahead of fifth-placed Arsenal.

This was not the way Benitez intended to start Chelsea's most crucial spell of the season.

With an FA Cup tie against Manchester United on Monday, Chelsea made seven changes to the side that overcame West Ham on their last Premier League outing.

Yet Benitez will have expected much more from those on duty, as Southampton, who had 24 points fewer than their opponents before the start, showed more hunger and desire.

Chelsea, who also face a crucial Europa League game against Rubin Kazan on Thursday, failed to heed the warning signs even after Rodriguez produced a fine finish following a clever build-up involving Davis and Lambert.

The lead lasted just 10 minutes as Terry was allowed to head his second league goal of the season following poor defending from a corner.

That should have awoken Chelsea from their slumber but the Saints regained the initiative through a sublime 35th-minute Lambert strike.

The 31-year-old former Bristol Rovers and Rochdale striker marked the 500th league appearance of his career with a terrific curling free-kick which Chelsea keeper Petr Cech could do little about.

Saints fans responded with chants of "Lambert for England" after the striker took his Premier League goal tally for the season to 14.

The home side was forced to bring on substitute goalkeeper Kelvin Davies at the start of the second-half after Artur Boruc complained of dizziness.

But Chelsea still could not muster an equaliser, Victor Moses coming closest with a swerving effort which former Sunderland stopper Davies did well to tip over the bar.

"Victories like today prove that we are on the right path.

"It is very important for the confidence of my players and especially the people surrounding our club, the technical staff.

"It is important that we believe we can achieve results as we saw today and we can continue achieving them in the future."

"I think that you could see that in the first half we didn't have the intensity we were expecting.

"We improved in the second half, made more chances, but still we didn't make the right decisions in the final third.

"But at least we were there and made the chances."