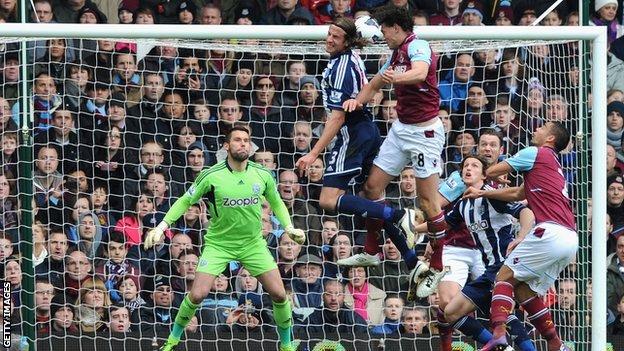 Andy Carroll scored twice to ease West Ham's fears of dropping into the Championship with a win over West Brom.

The striker's thumping header gave the home side the lead, before Hammers goalkeeper Jussi Jaaskelainen was forced into action with smart saves.

Baggies' Graham Dorrans scored a late penalty and Youssouf Mulumbu was sent off for kicking the ball at O'Neil.

West Ham's comfortable victory means they are now on 36 points, six clear of the bottom three, with eight games of the season remaining.

Having suffered five defeats in their previous seven league matches, Sam Allardyce's men were in danger of being dragged into a relegation battle.

Allardyce stated a total of 38 points would be enough to stay in the Premier League and said that he would only sign a new contract with the club - which runs out at the end of the season - once they are certain of survival.

Meanwhile, his counterpart Steve Clarke is enduring a slight blip as they missed the chance to move ahead of Liverpool into seventh spot, having enjoyed a fine season so far.

The Baggies found it difficult to deal with Carroll's aerial presence throughout, and were afforded no time on the ball by West Ham's pressing game with Mohamed Diame particularly imposing.

"A victory for West Ham in a match where Sam Allardyce's men scored three excellent goals. Andy Carroll's second was absolutely superb and West Brom offered little throughout this game. Frustration told at the end with the dismissal of Youssouf Mulumbu."

The visitors started well, having a goal rightly disallowed before Romelu Lukaku's deflected free-kick forced Jaaskelainen into a magnificent save low to his right-hand side.

Despite West Brom's early pressure, the home side took control and went ahead through on-loan frontman Carroll. The Englishman rose highest to power in his fourth goal of the season when he produced a towering header from O'Neil's corner after 16 minutes.

Minutes later, both Diame and Matt Jarvis had opportunities to double the Hammers' advantage, but neither player could hit the target.

However, the second did arrive soon after. A quick break from the home side allowed Ricardo Vaz Te to find O'Neil on the edge of the area, and the midfielder curled a strike over the helpless Ben Foster.

West Brom were looking for some inspiration to get back into the match in the second half and nearly found it through Belgian striker Lukaku, who fired a blistering drive narrowly over the bar, before full-back Billy Jones was thwarted by the excellent Jaaskelainen.

The home side wrapped the game up through Carroll, who allowed James Collins' free-kick to drop over his shoulder before despatching a volley into the bottom corner.

Dorrans grabbed a consolation for West Brom from the penalty spot with three minutes remaining, after Lukaku was fouled in the box by Matt Taylor.

And there was still time for Mulumbu's bizarre dismissal, when the Congolese midfielder picked the ball up after being fouled and kicked it against O'Neil in frustration.

"The points are more important than anything else but the performance along with the result and the fact that we won comfortably shows how good we have been at home all season.

"Andy Carroll scored the goal of the season for us, it was a fantastic goal, a world class finish. He scored two today and it was his best performance.

"It was an important win for us, putting us back in 11th spot and it is about where we have been all season. It shows the consistency for the season."

"We knew it would be a difficult game, and in the first half they were a little bit better than us. The goals ewe conceded are not like us.

"We started the game quite well, but there are small margins in this game. After being 1-0 down, we had a difficult afternoon.

"There are not been too many times this season that we have felt like this. We have seven game and we want to finish on a high."