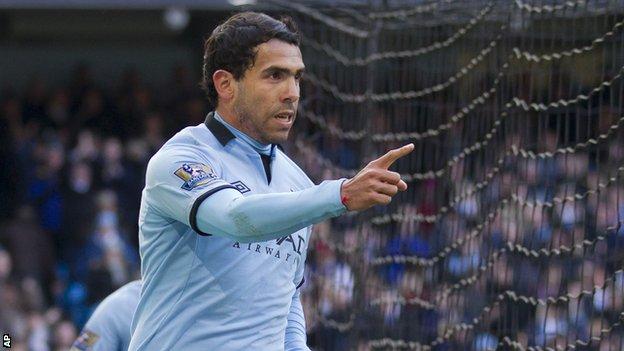 Manchester City outclassed Newcastle United to strengthen their grip on second place in the Premier League and ensure Manchester United did not increase their already commanding lead at the top.

United had briefly extended their advantage to 18 points by beating Sunderland earlier in the day but City responded with a convincing performance and victory that showed that, although they might have failed in the defence of their title, they are not about to throw it away.

Newcastle, who remain in danger at the other end of the table, defended with determination early on but Carlos Tevez and David Silva scored in quick succession before the break and, after it, Vincent Kompany and a James Perch own goal completed a one-sided victory.

Newcastle's intention to frustrate initially served them so well that it took almost half an hour before the game's first meaningful chance, which came when the Magpies made a rare foray forward and saw Papiss Cisse fizz a sweet volley against the outside of Joe Hart's post.

From then on, City took control, firstly by finding a way through Newcastle's massed backline, and then by finally finding the net.

City boss Roberto Mancini has often berated his side for being wasteful this season so he might not have been surprised to see Gareth Barry somehow blast over from six yards out with the goal gaping.

On this occasion, however, misses like that did not make much difference to the champions in the end.

There was more frustration for the home fans when a fine Rob Elliot stop kept out Gael Clichy's drive, Silva curled a free-kick wide and Edin Dzeko sent a header looping over the bar.

But the breakthrough finally came four minutes before the break. Silva sent Clichy galloping down the left and his low cross found Tevez sliding in to convert.

While Newcastle looked crushed, City were buoyant - and another goal for the home side followed moments later.

Elliot clawed another Dzeko drive to safety but could do nothing to keep out Silva's low effort after Nasri danced into the area.

Understandably, the Magpies changed their gameplan at the break and emerged on the attack.

Yohan Cabaye played a clever one-two with Moussa Sissoko and drilled a low shot a fraction wide, and Sissoko was just off target himself with two more efforts.

City were hardly rocking, however, and got the goal that sealed the points shortly before the hour mark. When a corner was not cleared, Barry's shot was deflected into the path of Kompany, who marked his return after two months out injured by turning it into the net.

Newcastle, to their credit, continued to come forward but that was more in hope than any expectation of salvaging anything from the game.

That hope disappeared for good with City's fourth goal, on 69 minutes. Yaya Toure crashed in a ball from the right that took a touch off Danny Simpson's foot and span past Elliot at his near post.

Elliot capped a fine individual display with another fingertip save to keep out a curling shot from City substitute Scott Sinclair but his side were well beaten by the end.