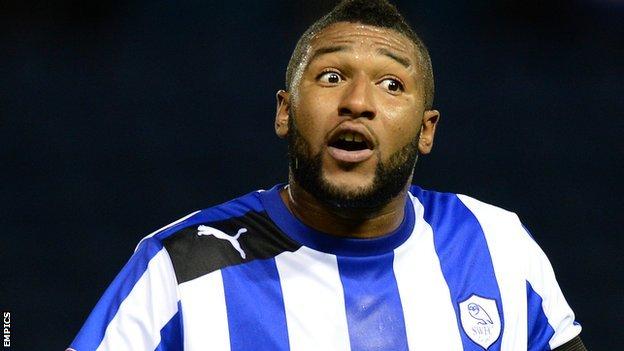 Sheffield Wednesday boosted their bid to avoid relegation at the expense of South Yorkshire rivals Barnsley.

The Owls went ahead through Gary Madine's close-range strike after the hour even though Barnsley had looked the more comfortable for long spells.

Reda Johnson made it 2-0 with a header before Wednesday's Lewis Buxton was dismissed for a second yellow card.

Madine was guilty of missing from the penalty spot before Jacob Mellis pulled one back for Barnsley at the end.

The win leaves Wednesday a point clear of the drop zone, while Barnsley lie second-bottom, a point from safety but with a game in hand.

The Tykes went into the game with back-to-back wins but victories for Peterborough and Wolves leaves them with a battle to avoid the drop.

The visitors had the better of the first 15 minutes, with Jim O'Brien dragging an effort wide and Chris Dagnall seeing his shot spilled by Chris Kirkland.

Dagnall had a shot well blocked by Miguel Llera before Marlon Harewood hooked wide from a good position at the far post.

Just as it looked like Barnsley were edging ahead, Wednesday took the lead against the run of play when Buxton broke down the right and slid a superb ball across the face of goal, with Madine turning home at the far post.

It was Madine's first goal since early December - a run of 13 games without scoring.

The second came 13 minutes from time when Johnson had acres of space to head home Llera's free-kick.

Barnsley made a game of it in six minutes of added time when Mellis smashed home from 16 yards, but Wednesday were not to be denied.

"In the second half we took it to them and thoroughly deserved the win in the end. It was all about getting the three points for us. We got in behind them a couple of times in the second half and could have won by more.

"Gary Madine had a good season last year and he scored a lot of goals. He has struggled to adapt at this level but he has worked at it. There has been a lot said about a falling out, but there have never been any problems.

"Strikers are commodity that everyone wants if they can score goals. It's nice for him to get his goal. If I didn't feel he could score goals he wouldn't be here. We will keep working with him."

"We have got to be constructive, the two goals were disappointing, they came when we had momentum. When you have a foothold you have to make sure you lock that down.

"The second goal has really disappointed me, we had to be brave. At 2-0, the momentum was with Sheffield Wednesday and I didn't want it to turn into a rout.

"There are eight more games to look forward to. The pressure on us is to stay in the league, but the pressure is on other teams to get out of it and they are just panicking and we have to take advantage.

"The players are hurting but when we leave here, we leave proud and in a positive state of mind."