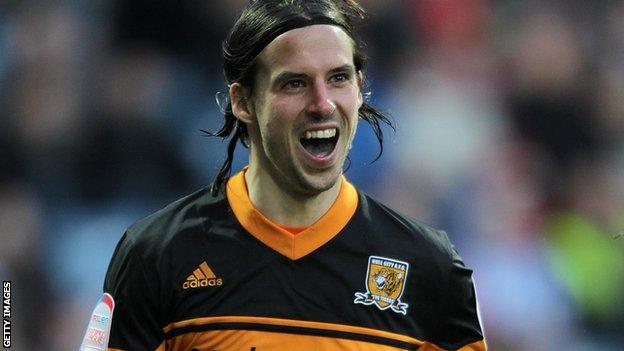 Hull closed the gap on Championship leaders Cardiff to four points as George Boyd's second-half goal gave them a narrow victory at Huddersfield.

Boyd, on loan from Peterborough, struck barely 30 seconds into the second half, smashing a shot high into the net.

Hull opted to defend their advantage after that but Huddersfield could not find a way through a resolute defence.

The defeat for Huddersfield leaves them just two points above the relegation zone.

Away day joy for Hull

Victory for Hull was their 10th away from home this season. All have been settled by a single goal.

Mark Robins's side went into the game knowing the gap between themselves and the bottom three had been reduced by wins for Sheffield Wednesday,Peterborough and Wolves - teams who were below them earlier in the day.

That perhaps played on the players's mind as they looked nervy in the opening stages, allowing Hull to control possession.

The visitor's early dominance enabled them to create the first chance of the game as Robert Koren picked out Jay Simpson inside the area but the striker's shot on the turn was straight at Huddersfield goalkeeper Alex Smithies.

Huddersfield's first chance of the game came in the 10th minute when Ahmed Elmohamady gifted possession straight to Neil Danns, who turned towards goal before launching a dipping effort that bounced just wide.

After those two efforts, though, there was very little of note for the crowd to get excited about, although Hull almost capitalised on a frail-looking Huddersfield defence as Koren crossed low into the box, but Anthony Gerrard just got ahead of the lurking Elmohamady to clear the danger.

Just 30 seconds into the second half Hull were ahead. Simpson's perfectly weighted ball pierced the Terriers defence and Boyd raced on to it and lashed a shot from the edge of the area into the roof of the net to score his fourth goal of the season and third against Huddersfield.

Going behind prompted a positive response from the hosts as they set about grabbing an equaliser and for the next 10 minutes they enjoyed arguably their best spell of the game.

James Vaughan headed just wide as Hull failed to clear a ball into the box before Danns nodded another chance straight at goalkeeper David Stockdale from Jack Hunt's teasing cross.

Hull seemed quite content to sit on their lead and rarely embarked on a foray into the Huddersfield penalty box, although Boyd had a chance when he was found unmarked inside the area but stabbed his shot straight at Smithies.

Substitute Danny Ward sent a free-kick from a promising position over the bar, but time was fast running out for the home side to snatch an equaliser.

Stockdale almost presented Huddersfield with the chance to grab a point in the last minute of stoppage time when he dropped a cross at the feet of Sean Scannell, but the winger dithered in possession and his effort was cleared to ensure Hull left with all three points.

"We have a huge game against Watford now on Tuesday. If we can go and get a result there, it's another game gone and you just want to protect that lead, that's the aim - can we protect it with seven games to go?

"It is a good position to be in, but there's still seven games to go and we know how quickly it can change.

"Who would have thought Leicester for example, would have won one of their last 10 and Palace I don't think have won in four or five, the way the Championship is, nothing surprises me. But if we can win (on Tuesday), it will be a huge result for us."

"We were not good enough. I do not think it was a great game by any stretch of the imagination.

"We restricted them to very little, but it is a difficult formation to play against, how they play it and with the quality of players they have got, they are obviously up there for a reason.

"We go to Bolton on Tuesday and have seven games left. It is an interesting end to the season."