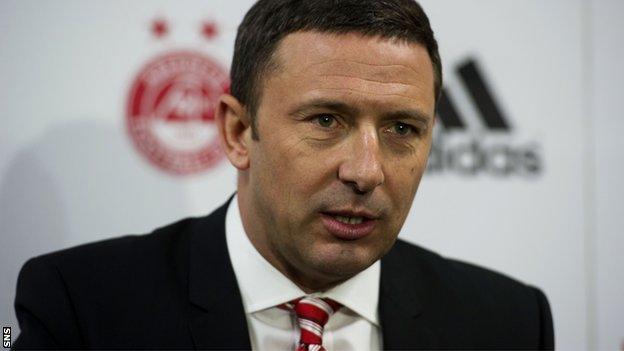 Derek McInnes says he will target silverware after being appointed as Aberdeen's new manager.

The 41-year-old, who was sacked as Bristol City boss in January, will succeed

McInnes and his assistant Tony Docherty have agreed deals until 2015.

"I'm absolutely thrilled to be given the opportunity to manage a club of the stature of Aberdeen," said McInnes.

Brown, 72, had planned to vacate the dug-out at the end of the season but said he would step aside earlier if the Dons could find an available replacement.

The former Scotland boss and his number two Archie Knox will oversee the next two matches, with McInnes taking over once the Scottish Premier League splits into two halves for the season's climax.

Ninth-placed Aberdeen, who are two points off the top six, host Hearts on Saturday before playing Dundee United at Tannadice.

"Craig and Archie also spoke with Derek to establish the most appropriate timing for a handover of duties," revealed chairman Stewart Milne.

"All agreed that bringing them in now would enable the incoming management team to have time to familiarise themselves with their new club, while Craig and Archie continue with their preparations over the next two games for a final push towards a top-six SPL position."

McInnes will use the next fortnight to familiarise himself with the personnel at Pittodrie.

"In tandem with trying to finish the current campaign in as high a league position as possible, I will also of course be assessing the squad with next season in mind," he said.

"There is so much to do, so many opportunities and I'm really looking forward to get started.

"Having been given an outline of the club's vision of the future I can clearly see the ambition here.

"And I can assure, fans, players, sponsors and everyone associated with Aberdeen Football Club that I will do everything within my power to build a team that will entertain the fans and, more importantly, bring long-awaited success back to this great club."

After beginning his management career at St Johnstone, where he finished his playing career, McInnes led the Saints to First Division title success and promotion to the SPL.

He joined Bristol City in 2011 and kept them in the Championship at the end of last season.

However, a run of poor results led to the former Rangers, Toulouse and West Brom midfielder being sacked in January.