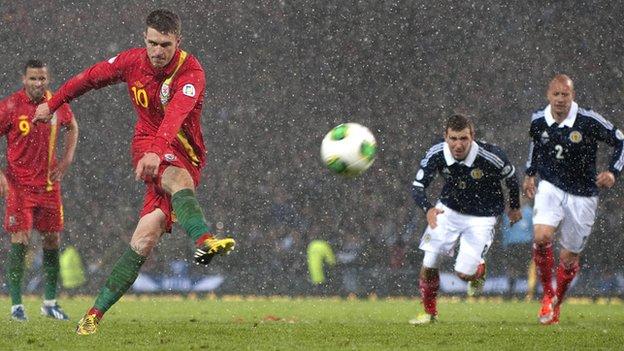 Aaron Ramsey has apologised to Wales manager Chris Coleman after being sent-off near the end of their 2-1 World Cup qualifying win over Scotland.

The Arsenal midfielder received a straight red card in stoppage time for a barge on James McArthur.

He will now miss Wales' Group A qualifier against Croatia at Swansea's Liberty Stadium on Tuesday.

"I said I'm sorry for letting the boys down because I'm missing the next game now," said Ramsey.

Ramsey had scored Wales' equaliser from the penalty spot after Grant Hanley had given Scotland a first-half lead.

Wales were leading thanks to Hal Robson-Kanu's headed goal when Ramsey elected to take a quick free kick with only seconds left on the clock.

His under-hit back pass found McArthur who was through on goal when the Arsenal man barged him off the ball.

"It was very disappointing - it's something I need to learn from," he said.

"I should have looked up at the clock and let the goalkeeper take the free-kick. I had to (foul McArthur) in the end.

"It's disappointing to do what I've done after a great performance."

Ramsey's red card was the second of a feisty encounter, with Scotland's Robert Snodgrass dismissed after receiving a second yellow for a foul on Chris Gunter which led to the penalty.

In spite of his personal disappointment, Ramsey was happy that Wales proved they were not a one-man team by fighting back from a goal down without Gareth Bale.

The Tottenham star did not come out for the second half thanks to a combination of the virus he'd been suffering from in the built-up to the game and a knock on an ankle.

Ramsey said: "We have some very good players who can do things, great things, and are comfortable on the ball. We proved that in the second half.

"Gareth Bale can do something out of the ordinary and that is what teams are wary of. But we showed we have a lot more to offer than just him."