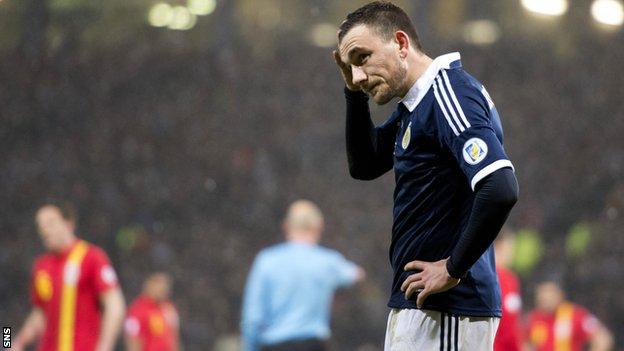 New manager, same outcome. Scotland had victory within their grasp and were in a commanding position, but somehow contrived to let it slip.

Gordon Strachan might point to Robert Snodgrass's shot at 1-0 up, which, if it had ended up in the back of the net rather than rebounding off the post, could have killed Wales off.

Scotland had somehow turned the game around, having spent the opening half-hour on the back foot, and with a goal advantage against a Wales side now without their talisman Gareth Bale, victory should have been achievable.

But a rash decision by Snodgrass to dive into an almost irretrievable situation and some static defending to allow Andy King and Hal Robson-Kanu to carve out the winner leaves the Scots no better off than when they last left the Hampden pitch after the draw with Macedonia.

Just as they had on that September evening, an anxious Scotland looked inferior to opponents who rarely inspire awe on the world stage.

What Friday night's showing proves, beyond reasonable doubt, is that Scotland's position at the bottom of Group A is no fluke.

In the early stages of the match, Wales passed Scotland off the park and in Aaron Ramsey, Bale and Craig Bellamy, they possessed players who dictated the game.

The absence of Darren Fletcher and Scott Brown was keenly felt, with the central midfield of James McArthur and Graeme Dorrans unable to keep possession or adequately break up the Welsh attacks.

The early loss of Steven Fletcher also robbed Strachan of a key talent, but it was in defence that the Scots looked desperately short of confidence, with the new central pairing of Gary Caldwell and Grant Hanley failing to gel.

But while a doggedness helped Scotland gain the upper hand for the middle half-hour of Friday's game, such traits cannot disguise the technical failings, which threaten to cast the national team into even deeper and darker depths.

Serbia, Scotland's next opponents, are two points above the Scots but there is little to suggest - either from Friday's game or the earlier draw between the sides at Hampden - that Strachan's men will move above them and off the foot of the table on Tuesday.

Scotland's only remaining home games are against the top two teams in the group - Belgium and Croatia - so the likelihood of a victory in the group is now seriously dwindling.

Craig Levein's assertion that Scotland could conceivably win every match in the group looks more outrageous by the game.

The effect a winless campaign would have on the country's ranking and subsequent chances of reaching future tournaments does not bear thinking about.

That is the immediate scenario Strachan has to avoid and if he was unclear of the size of the task facing him before now, he surely can no longer be so.

He has a very short period in which to galvanise a squad he says he trusts implicitly. That trust looked misplaced for much of Friday, but perhaps can be regained in Novi Sad on Tuesday.

It is an early test of his ability to restore a sense of self-belief to a group of players seemingly shorn of that characteristic.

It is also an opportunity for Strachan to find out just who he can count on within the squad when the chips are down, who has the stomach for the battle that clearly faces Scotland if the national team's fortunes are ever to be revived.