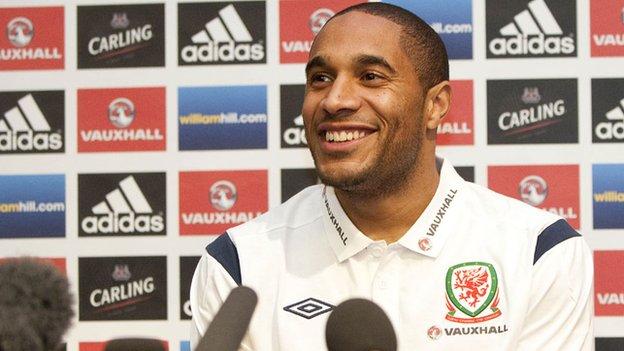 Wales captain Ashley Williams believes the character of the team can help them in their crucial World Cup qualifier against Croatia in Swansea on Tuesday.

Wales are third in Group A, seven points behind their opponents who are second behind Belgium.

But Williams says Wales' 2-1 win against Scotland underlined a new togetherness in the team.

"There's no little cliques, everyone gets on well and... on the pitch we're all there for each other," he said.

The Swansea City defender added that the team spirit is the best he has experienced, and played a big part in their fightback to beat Scotland after trailing 1-0 at half-time.

"That's the character of the lads," added Williams.

"I think we've got a great squad, it's probably the best time in the five years since I've been here [in the Wales squad].

"We all get on really well, there are no little cliques, and you can see that on the pitch. We're all there for each other, we're all talking and you see the character that we're showing.

"I think if you asked any of the boys, everyone's enjoying it we have a chat, we have a joke, it's loud.

"Coming away [with Wales] doesn't feel like a chore. That's the main thing you see when we go to places like Hampden on a Friday night when it's snowing and that togetherness shows on the pitch."

Wales lost 2-0 to Croatia in Osijek in October 2012, but the victory in Glasgow was the second time they had come from behind to beat the Scots in this qualifying group.

They trailed 1-0 in Cardiff in October before Gareth Bale struck twice to stun the visitors.

The back-to-back wins over Scotland have given Wales renewed hope, though they still trail pacesetters Belgium and Croatia.

"If you can go on a run you know stranger things have happened," said Wales defender Chris Gunter.

"We just need to focus on the next game and not get carried away.

"I think we can cause them [Croatia] a few problems.

"We have to respect them, but it'll be a really good evening and hopefully the fans can turn out and support us."