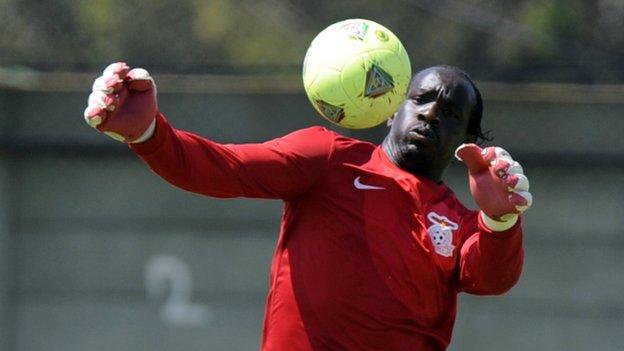 Former African champions Zambia were held to a surprise draw with Lesotho in their World Cup qualifying match on Sunday.

Zambia, who had to play almost all the second half with 10 men after goalkeeper Kennedy Mweene was sent off for a professional foul, were pegged back in the 89th minute.

Collins Mbesuma had ghosted in at the back post to put Zambia ahead with 17 minutes to play.

"We might come to regret these two points lost later in the campaign," said Zambia coach Herve Renard.

The result is a blow to Zambia's hopes, particularly as Group D to rivals Ghana took full advantage by thumping Sudan 4-0 later on Sunday.

It means Ghana are now only one point behind group leaders Zambia.

Elsewhere, Ethiopia moved a step closer to reaching their first World Cup finals as they beat Botswana 1-0 to move to return to top of Group A - they are now on seven points, two clear of South Africa.

But they left it late to secure the three points, Substitute Getaneh Kebede, who replaced fellow-striker Adane Girma for the second half in Addis Ababa, snatched the lone goal two minutes from time in the high-altitude east African city.

In Group C, Tanzania were comfortable 3-1 winners over Morocco.

Thomas Ulimwengu broke the deadlock a minute after half-time and there was a brace for Mbwana Samata before Youssef El Arabi reduced the arrears four minutes into stoppage time.

This humiliating loss, coupled with draws against Gambia and Ivory Coast, means Morocco are all but out of the running for Brazil, and the future of recently appointed coach Rachid Taoussi must be in doubt.

Nations Cup semi-finalists Mali had to come back from a goal down in Rwanda to secure a 2-1 win in Group H.

Meddy Kagere scored after 37 minutes to raise hopes of a first qualifying win for the Rwandan Wasps after a heavy away loss to Algeria and a last-gasp home draw with Benin.

But Mali scored twice within six minutes early in the second half through Mahamadou Samassa and Abdou Traore to take a two-point lead over Benin who play Algeria on Tuesday.

In a storming match in Group G, Equatorial Guinea came out on top against Cape Verde, winning 4-3. The match had been all square at 2-2 at half-time.

Equatorial Guinea have four points and are third in the group, behind Sierra Leone on goal difference, while Cape Verde are bottom without a point.

Liberia moved from the bottom of Group J to second place, one point behind Senegal, after Patrick Wleh and captain Anthony Laffor scored to secure a 2-0 victory over Uganda in Paynesville.

Former giants Cameroon gained most from a 0-0 stalemate between Democratic Republic of Congo and Libya in Kinshasa as it kept the Indomitable Lions top of Group I, one point ahead of the Mediterranean Knights.

Mozambique and Guinea drew 0-0 in a dour Group G clash in Maputo, leaving leaders Egypt with a chance to open a five-point gap should they beat generally poor travellers Zimbabwe in Alexandria on Tuesday.