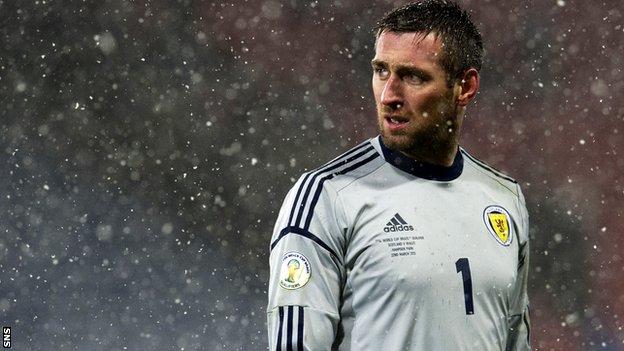 Goalkeeper Allan McGregor is unable to put his finger on why Scotland's World Cup 2014 qualifying campaign has been so disappointing.

The national side, who play Serbia on Tuesday, have drawn twice and lost three times in five Group A matches.

"Looking over the piece of the games, with the squad of players we've got, we could and should be doing better," McGregor said.

"You can ask anybody in the world why but I don't think there's a reason."

Scotland's last competitive victory came in a European Championship qualifier against Liechtenstein in October 2011, under then manager Craig Levein.

Gordon Strachan won his first game, a friendly versus Estonia, but failed to get a win in his opening competitive match against Wales on Friday.

"I think we've got a great group of players - a lot of them are playing at a very good level," he said.

"Things have gone against us in games but I'm not here to make excuses.

"Obviously every game you want to win, but the most important thing is getting it.

"We've been a long time without a win so I think all the boys will be choking for the first competitive win for the new manager."

After Grant Hanley's header against Wales, Scotland began the second half with renewed vigour and almost doubled their lead when a Robert Snodgrass shot smashed the post.

And Besiktas goalkeeper McGregor believes the Scots must relish the challenge posed by the Serbs in the Karadorde Stadium in Novi Sad on Tuesday.

"Just have it in our head, just be ready," he said.

"Don't think about anything else. You need to go out and enjoy it because we looked like we were enjoying it in the first 20 minutes of the second half on Friday. We looked good.

"We just need to be confident and get it into our heads that that's what we should be doing all the time, and hopefully that can bring us results."