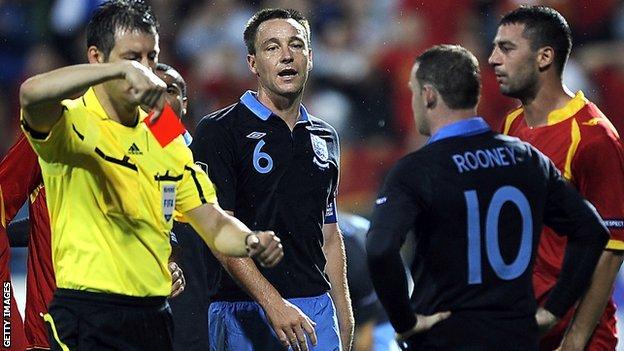 England defender Joleon Lescott expects Wayne Rooney to cope with any provocation he may face in Tuesday's World Cup qualifier in Montenegro.

Rooney, 27, missed the first two games of England's Euro 2012 campaign after being sent off for kicking Montenegro's Miodrag Dzudovic as Fabio Capello's side were held 2-2 in Podgorica in a qualifying game in October 2011.

Lescott said: "They might play on his temperament but Wayne has matured now. He is older and more experienced and I'm sure he will be professional."

He added: "There will be a lot of expectation on Wayne but I don't think he will let that faze him in any way.

"I don't think he will be drawing on any negativity from previous performances, he will just be focused on producing the goods."

The 30-year-old centre-half insists his England team-mates will cope with the intimidating atmosphere inside the small but hostile Podgorica City Stadium and also warned Montenegro any attempt to wind-up Rooney could backfire.

"Sometimes opponents can kick, niggle, waste time. Anything to try and frustrate you.

"You have to deal with that but those kinds of things come quite easy for me. I don't think anyone will be fazed by what they have to face.

"We're all old enough to realise they will try to wind us up, waste time and stuff like that but I like to think we're all mature enough to deal with that."

Defeat would leave England facing the prospect of needing a play-off to reach Brazil in 2014 - and Lescott knows Rooney's presence remains as vital as ever.

He said: "The biggest disappointment of his sending off in Montenegro last time was the fact it meant he was going to miss games in the Euros. Thankfully it didn't affect us qualifying for the finals but on another occasion it could have done.

"He is a top professional and he believes in his own ability more than anyone so I'm sure he won't have a point to prove. He'll just be determined to win the game for us.

"It's a massive game for us. We're confident we can win the group. It is in our hands and if we win on Tuesday we will be halfway through the qualifying stage, we'll be top and confident we can get through to Brazil."