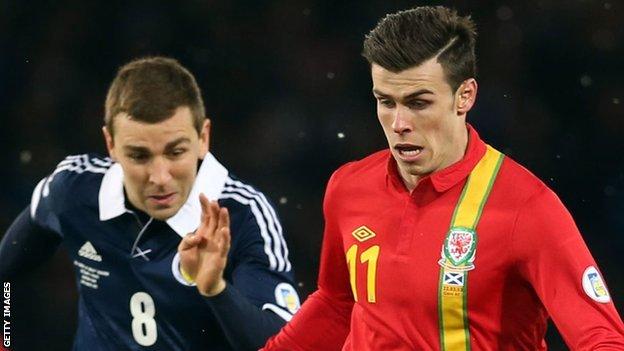 Gareth Bale trained with Wales on Sunday, easing fears over his fitness before Tuesday's World Cup qualifying match with Croatia in Swansea.

Bale was substituted at half-time in Friday's 2-1 win against Scotland at Hampden Park.

The Tottenham winger had been suffering the effects of a stomach virus and an ankle injury.

Chris Coleman's side are third in Group A, seven points adrift of Croatia, who are second behind leaders Belgium.

The Football Association of Wales posted pictures of Bale training with the rest of the Wales squad on their official Twitter feed.

The player himself tweeted after the match in Glasgow that he was confident of being fit to face Croatia.

Before the victory in Scotland, Bale had scored five of Wales' six goals in Chris Coleman's seven games in charge.

But goals from Aaron Ramsey and Hal Robson-Kanu in Glasgow helped counter criticism that Wales are a one-man team.

"We showed we can cope without Gareth," said captain Ashley Williams. "He dug in at Hampden and gave it a go but you could see he wasn't himself.

"He tried for 45 minutes but it wasn't right. But after that we came through and no one can say we are a one-man team."

However, Wales will be without suspended Arsenal midfielder Aaron Ramsey following his late red card at Hampden Park.