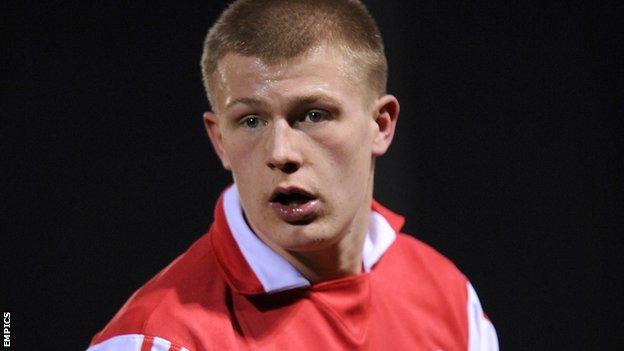 Josh Gowling put Harriers ahead from 10 yards after the Hatters failed to clear Kyle Storer's corner.

Scott Rendell hit the crossbar for the hosts before stabbing wide but Malbon then doubled Harriers' lead after rounding Luton keeper Mark Tyler.

Andre Gray reduced the deficit from close range but Harriers held on.

Luton had gone close to scoring before Gray found the net when Gowling struck the ball against his own crossbar.

Harriers remain one point ahead of second-placed Mansfield but the Stags, who thrashed Gateshead 4-0, have three games in hand.

Steve Burr's side are now guaranteed a play-off place, after Forest Green could only draw with Telford.

"We gave ourselves too much to do in the second half.

"I though he [Matt Robinson] did very well. I was very pleased with him. I thought his all round game was very very good. He's only a young boy so I think we can push on a bit with him.

"Their team works much better, the team have been playing together for some time, their understanding of each other, that's the key.